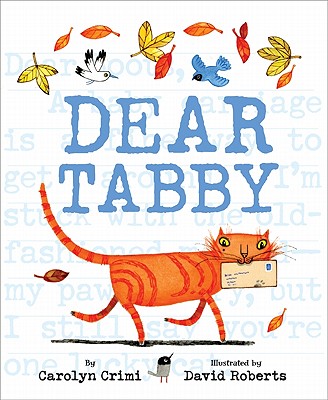 Trying to kick the catnip habit?

Itching to ditch those pesky fleas?

Sick of the same old "fetch, roll over, stay" routine?

Tabby D. Cat, longtime alley resident, has been help-ing the furry and feathered creatures of Critterville for all nine of her lives. From hamsters to hounds, Tabby's advice column has just the right advice for any pet . . . but can Tabby find happiness for herself?

From Carolyn Crimi and David Roberts comes this hilarious and heartwarming tale of finicky felines, happiness-seeking hounds, and finding your own place to call home.

Carolyn Crimi received her MFA in writing for children from Vermont College in 2000.She has published over fifteen books, including Dear Tabby, Don’t Need Friends, Boris and Bella, Henry & the Buccaneer Bunnies, Where’s My Mummy?, and I Am the Boss of This Chair. Her book There Might Be Lobsters won the Golden Kite Award in 2018 for Picture Book Text, and her middle grade debut, Weird Little Robots, was named a BEA Book Buzz pick. Carolyn has received over thirty state awards and award nominations and was given the Prairie State Award in 2012 for her body of work.

David Roberts is the illustrator of A House Called Awful End and the other books in the popular Eddie Dickens Trilogy, as well as the picture books Rapunzel: A Groovy Fairy Tale and the Charlotte Zolotow Honor Book Mrs. Crump's Cat. He is also the author-illustrator of the picture book Dirty Bertie. David was runner-up for the prestigious Mother Goose Award for children's illustration. He lives in London, England.