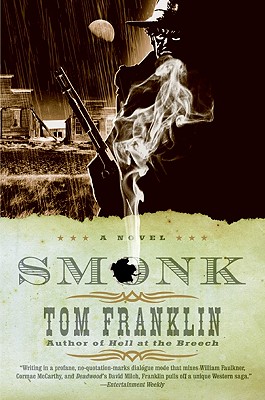 It's 1911 and the townsfolk of Old Texas, Alabama, have had enough. Every Saturday night for a year, E. O. Smonk has been destroying property, killing livestock, seducing women, cheating and beating men, all from behind the twin barrels of his Winchester 45-70 caliber over-and-under rifle. Syphilitic, consumptive, gouty, and goitered—an expert with explosives and knives—Smonk hates horses, goats, and the Irish, and it's high time he was stopped. But capturing old Smonk won't be easy—and putting him on trial could have shocking and disastrous consequences, considering the terrible secret the citizens of Old Texas are hiding.


Praise For Smonk: A Novel…

“Maintaining the dark tone of his excellent first novel, Franklin goes for the gothic in [this] weirdly fascinating tale” — Kirkus Reviews

“Franklin’s talent for the completely offbeat and outrageous illuminates a world that is at once vibrantly alive and completely human.” — Times-Picayune (New Orleans)

“An edgy, quirky, bawdy look at the days of cowboys and shootouts, Smonk is the real deal.” — David Milch, Creator of Deadwood

“I am amazed at Tom Franklin’s power” — Philip Roth

“A David Lynch and Quentin Tarantino codirection of Deadwood . . . a world where not one person knows an iota of goodness.” — San Francisco Chronicle Book Review

“Part western, part Southern gothic, yet wholly original, this is a beef jerky of a story […] full of flavor” — Tampa Tribune