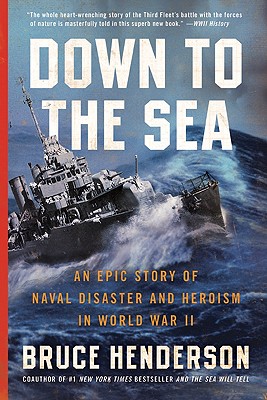 Down to the Sea

“World War II produced so many compelling stories that even students of that momentous conflict are apt to discover we’ve missed whole vital episodes. Down to the Sea, about a devastating 1944 Pacific typhoon that sank three destroyers and cost 756 American sailors their lives, is just such an eye-opener.” — New York Post

From the New York Times bestselling author of Sons and Soldiers, an epic story opening at the hour the Greatest Generation went to war on December 7, 1941, and following four U.S. Navy ships and their crews in the Pacific until their day of reckoning three years later with a far different enemy: a deadly typhoon.

In December 1944, while supporting General MacArthur’s invasion of the Philippines, Admiral William “Bull” Halsey neglected the Law of Storms—the unofficial bible of all seamen since the days of sail—placing the mighty U.S. Third Fleet in harm’s way. One of the most powerful fighting fleets ever assembled under any flag, the Third Fleet sailed directly into the largest storm the U.S. Navy had ever encountered—a maelstrom of 90-foot seas and 160-mph winds. More men were lost and ships sunk and damaged than in most combat engagements in the Pacific. The final toll: 3 ships sunk, 28 ships damaged, 146 aircraft destroyed, and 756 men lost at sea.

In all, 92 survivors from the three sunken ships (each carrying a crew of about 300) were rescued, some after spending up to 80 hours in the water. Scores more had made it off their sinking ships only to perish in the monstrous seas; some from injuries and exhaustion, others snatched away by circling sharks before their horrified shipmates. In the farflung rescue operations Bruce Henderson finds some of the story’s truest heroes, exhibiting selflessness, courage, and even defiance. One badly damaged ship, whose Naval Reserve skipper disobeyed an admiral’s orders to abandon the search, singlehandedly saved 55 lives.

Drawing on extensive interviews with nearly every living survivor and rescuer, many families of lost sailors, transcripts and other records from two naval courts of inquiry, ships’ logs and action reports, personal letters, and diaries, Bruce Henderson offers the most thorough and riveting account to date of one of the greatest naval dramas of World War II.


Praise For Down to the Sea: An Epic Story of Naval Disaster and Heroism in World War II…

“World War II produced so many compelling stories that even students of that momentous conflict are apt to discover we’ve missed whole vital episodes. Down to the Sea, about a devastating 1944 Pacific typhoon that sank three destroyers and cost 756 American sailors their lives, is just such as eye-opener.” — New York Post

“With a storm scene right out of “The Caine Mutiny,” Down to the Sea is a vivid, powerful drama of men and ships in time of war.” — Evan Thomas, author of Sea of Thunder

“My father, Chief Petty Officer John E. Kreidler, was one of more than 700 men who lost their lives in the great Pacific typhoon of December 1944. In the war’s aftermath, very little came to light about the fate of these men, and their sacrifice was scarcely acknowledged. Now Bruce Henderson has written a book that will stand as the ultimate history of the men and ships that encountered this monumental storm at sea.” — John D. Kreidler

“Because of Bruce Henderson’s skills as a historian and a tale-teller, in this book I learned how my father died. Far more importantly, I learned how he lived. But anyone may find himself or herself drawn into this titanic story of the terrible choices war forces on people who must live with their consequences, if they are lucky enough to live.” — Greil Marcus, author of The Shape of Things to Come

“What stands out in Down to the Sea are those moments that transform the disaster into an epic of courage and sacrifice. This is a book for anyone who wonders what happens when a ferocious sea attacks a ship and her crew.” — Naval History

Praise for AND THE SEA WILL TELL: “Engrossing...compelling. This book succeeds on all counts” — L.A. Times Book Review