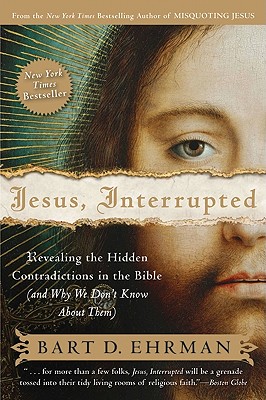 The problems with the Bible that New Testament scholar Bart Ehrman discussed in his bestseller Misquoting Jesus—and on The Daily Show with John Stewart, NPR, and Dateline NBC, among others—are expanded upon exponentially in his latest book: Jesus, Interrupted. This New York Times bestseller reveals how books in the Bible were actually forged by later authors, and that the New Testament itself is riddled with contradictory claims about Jesus—information that scholars know… but the general public does not. If you enjoy the work of Elaine Pagels, Marcus Borg, John Dominic Crossan, and John Shelby Spong, you’ll find much to ponder in Jesus, Interrupted.


Praise For Jesus, Interrupted: Revealing the Hidden Contradictions in the Bible (And Why We Don't Know About Them)…

“Ehrman’s ability to translate scholarship for a popular audience has made the James A. Gray Distinguished Professor and Chair of the Department of Religious Studies at the University of North Carolina at Chapel Hill a superstar in the publishing world”
— IndyWeek

“For both scholars and the masses who read about religion, Bart D. Ehrman needs no introduction . . . He adds the personal to the scholarly for some of his works, detailing how he went from a Moody Bible Institute-educated fundamentalist evangelical to an agnostic .
— Durham Herald-Sun

“There’s something delicious (for nonbelievers, anyway) about the implacable, dispassionate way that Ehrman reveals how the supposedly “divine truth” of Christianity was historically constructed.”
— Salon.com
or support indie stores by buying on
(This book is on backorder)
Copyright © 2020 American Booksellers Association