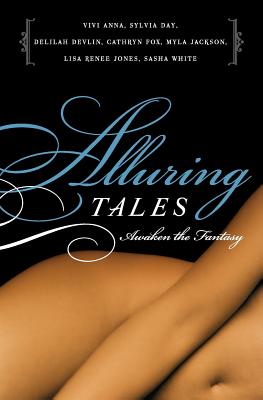 What is your most wicked fantasy?

Pleasure beckons and satisfaction is guaranteed in seven titillating stories of love that know no boundaries. Surrender to the passion and follow your desires into unexplored realms of sensuous delights. Awaken the fantasy!

A big-city cop discovers that once bitten is not twice shy after spending a tantalizing night with a beautiful vampire . . .

A sheltered young woman opens a mysterious locket—and is plunged into a legendary battle of good versus evil to set her imprisoned lover free . . .

A seductive warlock will not rest until the powerful temptress he lusts for is begging to be dominated . . .

A television executive lets loose when her favorite heartthrob strides into her office—and gives her the ride of her life . . .

This one-night stand may be too hot to handle for a newly single woman, but that won't stop her from enjoying every delicious second . . .

When a mysterious package opens to reveal an oh-so-sexy, nearly naked man, these two have no choice but to hide out . . . for a good, long time.

A full-time writer and part-time bartender, she lives in Northern Alberta, and loves to hear from readers. She can be found on her websites’s blog most afternoons.

Myla Jackson enjoys writing fast, fun, and sizzling stories that elicit laughter, excitement, fear, and tears from her readers. She won the 2004 RWA Golden Heart Award for Best Paranormal Romance and continues to produce books readers love. Myla enjoys the challenge of writing in multiple genres where she can explore every emotion and conquer new worlds.

A New York Times and USA Today bestselling author, Cathryn Fox has two teenagers who keep her busy and a husband who is convinced he can turn her into a mixed martial arts fan. Cathryn can never find balance in her life and is always trying to keep up with emails, Facebook, Pinterest and Twitter. She spends her days writing page-turning books filled with heat and heart, and loves to hear from her readers.

A bad girl at heart, vivi anna burns up the pages with her unique brand of fantasy fiction. Whether it’s in ancient Egypt, or in an apocalyptic future, vivi writes fast-paced action-adventures featuring strong independent women that can kick some butt, and dark handsome heroes to die for.

Always a risk taker, Delilah Devlin lived in the Saudi Peninsula during the Gulf War, thwarted an attempted abduction by white slave traders, and survived her children’s juvenile delinquency. In addition to Saudi Arabia, she has lived in Germany and Ireland, but calls Arkansas home for now.

Lisa Renee Jones is an author of paranormal and contemporary romance. She lives in Austin, Texas, where she spends her days writing the dreams playing in her head. Before becoming a writer, Lisa lived the life of a corporate executive, often taking the red-eye flight out of town and flying home just in time to make a Little League ball game.

Her award-winning company LRJ Staffing Services had offices all over Texas and in Nashville, and was recognized by Entrepreneur magazine in 1998 as one of the top ten growing women-owned businesses.

Over the next year, Lisa plans to move to New York just in time for a busy year of book releases.

Sylvia Day is the #1 New York Times and #1 international bestselling author of over 20 award-winning novels sold in more than 40 countries. She is a #1 bestselling author in 23 countries, with tens of millions of copies of her books in print. Her Crossfire series has been optioned for television by Lionsgate.