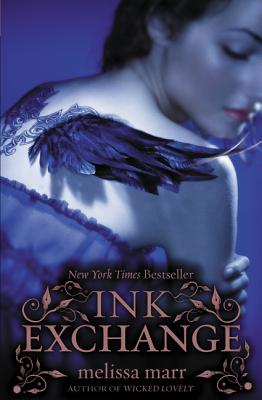 “Compulsive enough to give the Twilight series a run for its money.” — Publishers Weekly (starred review)

“Another highly addictive read...Compulsive enough to give the Twilight series a run for its money, and dizzyingly more sinister.” — Publishers Weekly (starred review)

“Newcomers and returning readers alike will devour this companion novel to Marr’s ragingly popular Wicked Lovely . . . . This dark fantasy about survival and transformation is as mesmerizing as its urban faery subjects.” — Booklist

“Readers will be drawn in by Marr’s darkly poetic imagery and language, her vivid portrayal of the art of tattooing, and her shadowy love triangle. This is indeed a delicious, smoky delight.” — Bulletin of the Center for Children’s Books

“As the sequel to Wicked Lovely, Ink Exchange is even more compelling. Their [the characters’] fierce, sometimes despairing search for their true selves gives Ink Exchange its sinister power.” — Washington Post Book World

“This dark fantasy about survival and transformation is as mesmerizing as its urban faery subjects.” — Booklist

“A delicious, smoky delight.” — Bulletin of the Center for Children’s Books