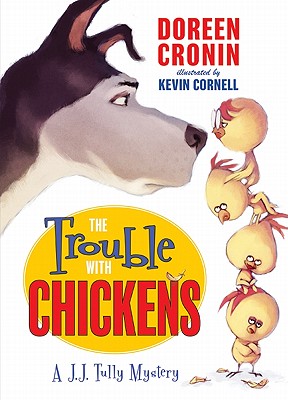 The Trouble with Chickens

From the bestselling, award-winning author-illustrator team of Doreen Cronin and Kevin Cornell comes the first book in a heavily illustrated, hilarious chapter book series about the adventures of a dog detective. Perfect for fans of Sara Pennypacker's Clementine series and Jarrett J. Krosoczka's Lunch Lady series. This chapter book is an excellent choice to share during homeschooling, in particular for children ages 5 to 7 who are ready to read independently. It’s a fun way to keep your child engaged and as a supplement for activity books for children.

“Cronin brings her droll humor to the chapter book set with great success. Fast-paced and funny, with interesting vocabulary and a well-constructed plot, this is terrific fare for readers who are ready to move beyond picture books, but are intimidated by longer works.”
— Publishers Weekly (starred review)

“The noirlike detective Tully and the funny chickens running around, well, like chickens make appealing characters, especially as drawn by Cornell, who knows how to get TV cartoon–style humor out of the action.”
— Booklist

Praise for Doreen Cronin’s DIARY OF A FLY: “Will have kids laughing out loud.”
— School Library Journal (starred review)

Praise for Doreen Cronin’s DIARY OF A FLY: “Like its predecessors, this diary is a crowd-pleaser.”
— ALA Booklist

Praise for Doreen Cronin’s DIARY OF A SPIDER: “Hits squarely on the middle-grade funnybone.”
— Bulletin of the Center for Children’s Books