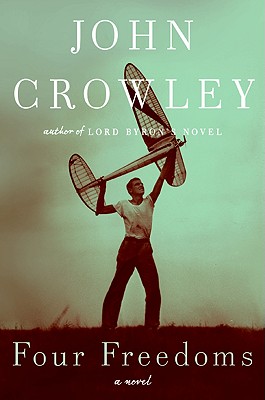 "So rich and so evocative and so authentic." —Tom Brokaw, author of The Greatest Generation

From the critically acclaimed author of Lord Byron’s Novel and The Translator comes a novel set in World War II America that follows the stories of a group of aircraft factory workers—in particular, the enigmatic figure of draftsman Prosper Olander. Named one of the Best Books of 2009 by the Washington Post, Four Freedoms is a beautifully crafted story of liberation and redemption from an author who has been compared to Robertson Davies, Thomas Mann, and Gabriel Garcia Marquez.

John Crowley lives in the hills of northern Massachusetts with his wife and twin daughters. He is the author of ten previous novels as well as the short fiction collection, Novelties & Souvenirs.


Praise For Four Freedoms: A Novel…

“Ultimately, the significance of Four Freedoms lies in its thoroughness, the sheer specificity. . . . The result is an accessible, painstakingly crafted work that offers many pleasures and rewards. It could be the novel that finally brings Crowley the wide attention he has long deserved.”
— Washington Post

“Four Freedoms.perfectly captures an era—WWII America—when the chosen are overseas and the left-behind are granted a rare moment of possibility. Crowley’s extraordinary characters and the poignant, funny, disturbing ways they find to connect with one another make you wish this war would never end.”
— San Francisco Chronicle, Top-Shelf Fiction Pick

“John Crowley is a virtuoso of metaphor, a peerless recreator of living moments, of small daily sublimities. And his latest novel, Four Freedoms, is in many ways his most unguarded and imaginative work.”
— New York Times Book Review

“Brilliantly realized .... More rich, satisfying food for thought from one of America’s most imaginative and accomplished novelists.”
— Kirkus Reviews on FOUR FREEDOMS

“In a tricky narrative that weaves in and out of the novel’s present (1942–5) and lavishly detailed flashbacks to the characters’ earlier lives, Crowley creates a fascinating microcosm....More rich, satisfying food for thought from one of America’s most imaginative and accomplished novelists.”
— Kirkus Reviews (pointer) for FOUR FREEDOMS

“Although nominally about life at an American aircraft factory during World War II, Crowley’s complex and subtle novel is much grander. . . . Four Freedoms is also a triumph of both research and imagination. . . . A wonderful novel that readers won’t soon forget.”
— Booklist (starred review)

“One gets the feeling that Crowley loves observing women because he captures them so precisely and so intimately....FOUR FREEDOMS goes back in time... bringing us stories filled with love, loss, integrity, and heart.”
— www.about.com

“Four Freedoms is so rich and so evocative and so authentic.”
— Tom Brokaw
or
Not Currently Available for Direct Purchase
Copyright © 2020 American Booksellers Association