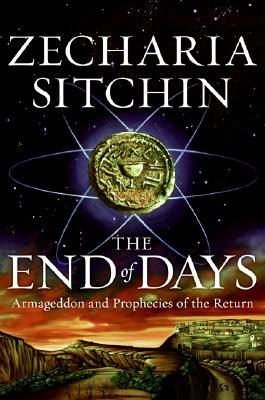 Armageddon and Prophecies of the Return

Why is it that our current twenty-first century a.d. is so similar to the twenty-first century B.C.? At a time when religious fanaticism and a clash of civilizations raise the specter of a nuclear Armageddon, many ask: Is history destined to repeat itself? What does the future hold? Will biblical prophecies come true, and if so, when?

Ever since Zecharia Sitchin, in his first trailblazing book The 12th Planet, brought to life the Sumerian civilization and its record of the Annunaki—the extraterrestrials who had come to Earth from their planet Nibiru, fashioned mankind, and gave us civilization and religion—questions have abounded. Are the ancient gods still here, or did they leave? Will they return? What will happen then? Will there be another Deluge or Apocalypse when Nibiru meets Earth? What about “Planet X” and the Mayan 2012? What about Jesus?

In The End of Days, a masterwork that required thirty years of additional research, Sitchin dares to give the answers by presenting compelling new evidence that the Past is the Future—that mankind and its planet Earth are subject to a predetermined cyclical Celestial Time.

Tracing historical events from the messianic fervor and use of nuclear weapons in the twenty-first century B.C., Sitchin resolves ancient enigmas like the Nazca Lines or the origin and significance of the Cross, the Fishes, and the Chalice, places in context the events of the Last Supper and hidden clues like those in Da Vinci's painting, explains the space-related reasons for the everlasting centrality of Jerusalem, and—following in the footsteps of Sir Isaac Newton—deciphers the Time Code in the books of Daniel and Revelation and of the Day of the Lord and the End of Days prophecies.

In this remarkable and relevant conclusion to his bestselling The Earth Chronicles series, Sitchin shatters perceptions and uses history to reveal what is to come at The End of Days.


Praise For The End of Days: Armageddon and Prophecies of the Return…

“Sitchin’s fans will find this an interesting, though inconclusive read. As for the inevitably skeptical majority, they will take a certain amount of entertainment from wondering what each new chapter will bring: Sodom and Gomorrah destroyed by a nuclear bomb? Solomon’s Temple built on top of a spaceport? Muslim minarets simulating rockets ready for launch? Wow.”
— Kirkus Reviews

Zecharia Sitchin is an internationally acclaimed author and researcher whose books offer evidence that we are not alone in our own solar system. One of a handful of scholars able to read the Sumerian cuneiform tablets, he has combined archaeology, ancient texts, and the Bible with the latest scientific discoveries to retell the history and prehistory of mankind and planet Earth. His trailblazing books have been translated into more than twenty languages; his first one, an oft-quoted classic, celebrates the thirtieth anniversary of its publication. A graduate of the University of London and a journalist and editor in Israel for many years, he now lives and writes in New York.