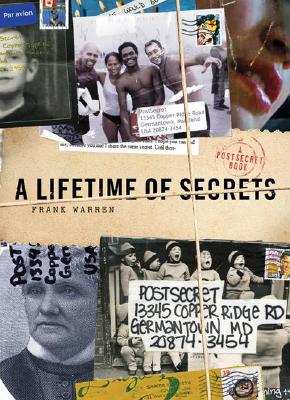 A Lifetime of Secrets

For the past three years Frank Warren has invited people of all backgrounds and nationalities to send him creatively decorated postcards bearing secrets they have never before revealed. He has shared these PostSecrets on his award-winning blog, www.PostSecret.com, in an internationally traveling art exhibit, and in three electrifying books: the bestselling PostSecret, My Secret, and The Secret Lives of Men and Women.

Now, in his most extraordinary book yet, Warren again delves into our collective confessions, presenting a never-before-seen selection of provocative and moving PostSecrets. A Lifetime of Secrets lays bare our private fears, hopes, regrets, and desires, from people as young as eight and as old as eighty. From painful admissions of infidelity to breathtaking revelations and endearing sentiments, Warren’s latest collection will shock and move readers of every age, revealing secrets that have haunted their creators for a lifetime.


Praise For A Lifetime of Secrets: A PostSecret Book…

“A fascinating public airing of private thoughts. . . The range of efforts (meticulous, sloppy, artful, ponderous) will astound you.”
— – TIME.com, "50 Coolest Websites of 2005"

“Humanity at its finest . . . And because of it I am falling in love with the world again.”
— – A contributor on Postsecret.com

“Standing in the midst of all this naked shame, guilt, anger and, yes, hope, you’re suddenly not so alone.”
— Washington Post

“[The postcards] are mini-works of art. All of them are riveting …”
— USA Today

“You’re bound to feel, after reading these things, something like a deity on the receiving end of the world’s prayers.”
— Salon.com

Frank Warren started PostSecret as a community art project where he invited total strangers to anonymously mail in their secrets on a homemade postcard. This simple act sparked a global phenomenon. Frank has received over 1 million secrets in his mailbox with more arriving every day but Sunday. PostSecret.com has won seven Webby Awards and is the most visited advertisement-free blog in the world. The postcards have been curated for five New York Times bestselling books and have been exhibited at the Museum of Modern Art and the American Visionary Art Museum. Frank has traveled the world sharing secrets and stories from Australia to the White house. There is a PostSecret album, a PostSecret TED Talk and a PostSecret Play on tour. In 2011 Frank was awarded the ‘HopeLine Lifetime Achievement Award’ for his work on suicide prevention and was invited to the White House to work on issues of mental wellness. Frank lives in Germantown, Maryland, with his wife and daughter.