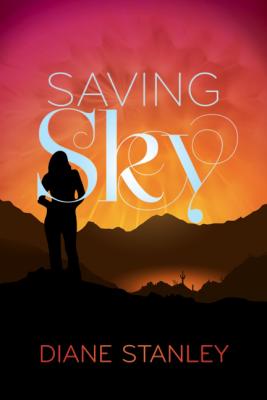 The country is at war, terrorists strike at random, widespread rationing is in effect, and the power grid is down. But thirteen-year-old Sky Brightman is remarkably untouched by it all. She lives off the grid on sixty acres of rural New Mexico ranch land with chores to do and horses to ride and no television or internet to bring disturbing news into her family's adobe house. Sky's schoolmates think she's a little weird.

Then a string of mysterious arrests begins, and her new friend, Kareem, becomes a target. Sky is finally forced to confront the world in all its complexity. Summoning her considerable courage and ingenuity, she takes a stand against injustice. With humor, hope, and fierce determination, she proves that even a child can change the world.

“The main characters are well rendered and likable, and, in her portrayal of the earth-centered, nurturing Brightman family, Stanley succeeds in delivering the message that hope trumps fear.”
— School Library Journal

“This page-turner skillfully captures the irrational fear of a public under siege while giving kids a modern-day, almost-just-like-them female hero who champions hope. Inspiring.”
— Kirkus Reviews

“This will certainly raise poignant questions about a world that is only very slightly unfamiliar and about the way readers would respond in similar circumstances.”
— Bulletin of the Center for Children’s Books

“This thought-provoking novel explores both the frightening power of mob mentality and fear tactics, along with hopeful possibilities offered when individuals take courageous stands for justice.”
— Publishers Weekly

Praise for Bella at Midnight: “Once begun, it will be hard to put down.”
— Kirkus Reviews (starred review)
or
Not Currently Available for Direct Purchase
Copyright © 2020 American Booksellers Association