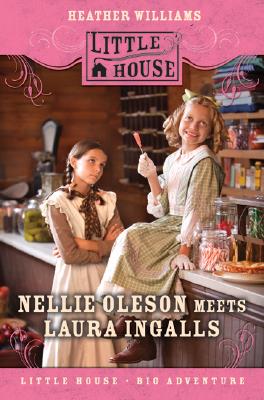 Nellie Oleson does not like living in Walnut Grove. It's dirty and dusty and full of poor farmers.

One day a new girl, Laura Ingalls, comes to school. Laura's dress is too short, she doesn't wear shoes, and she lives out on the lonely prairie. But everyone wants to be Laura's friend. Nellie doesn't understand: If she's the prettiest and richest girl in Walnut Grove, shouldn't she be the most popular?

Nellie will do anything to get Laura Ingalls out of her life, and one day her wish comes true. Something terrible does happen, but not just to Laura Ingalls—it happens to the entire town of Walnut Grove.

Heather Williams is the pen name for Tui Sutherland, author of several children’s books, including Nellie Oleson Meets Laura Ingalls, Who Was Harry Houdini? and the Pet Trouble series. She is also one of four authors working on the bestselling Warriors and Seekers books under the name Erin Hunter. In 2009, she was a two-night champion on Jeopardy!, which is not something she could have done in Almanzo’s day! She currently lives in Boston with her family.