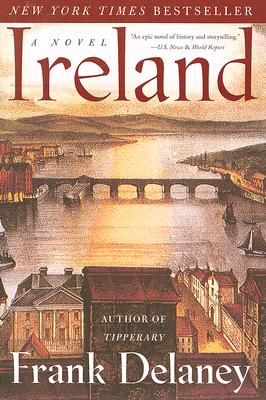 In the winter of 1951, a storyteller, the last practitioner of an honored, centuries-old tradition, arrives at the home of nine-year-old Ronan O'Mara in the Irish countryside. For three wonderful evenings, the old gentleman enthralls his assembled local audience with narratives of foolish kings, fabled saints, and Ireland's enduring accomplishments before moving on. But these nights change young Ronan forever, setting him on a years-long pursuit of the elusive, itinerant storyteller and the glorious tales that are no less than the saga of his tenacious and extraordinary isle.


Praise For Ireland: A Novel…

“In the end, IRELAND is, as the Irish themselves are fond of saying about everything from cabbage to castles, brilliant.”
— San Antonio Express-News

“Miraculous ... As befits its title, IRELAND touches the heart and moves the soul.”
— Richmond Times-Dispatch

“Extraordinary … Delaney is such a fabulous storyteller that the 560 pages fly by.”
— Connecticut Post

“Delaney has written an epic novel on the history of Ireland....He’s a born storyteller.”
— Hartford Courant

“A sprawling, riveting read ... the stories utterly captivate ...in this rich and satisfying book.”
— Publishers Weekly

“A vivid rendering of Irish history.. reminiscent of the best of James Michener in scope and sheer crowd-pleasing potential.”
— Kirkus Reviews

“A remarkable achievement....Frank Delaney has written a beautiful book.”
— Edward Rutherfurd, New York Times bestselling author of LONDON and THE PRINCES OF IRELAND

“An absolute masterpiece. With this extraordinary novel Frank Delaney joins the ranks of the greatest of Irish writers.”
— Jack Higgins, New York Times bestselling author of Edge of Danger

“If you’re a lover of Irish myths and history, there are rich pickings here.”
— The Guardian

Frank Delaney was born in Tipperary, Ireland. A career in broadcasting earned him fame across the United Kingdom. A judge for the Booker Prize, several of his nonfiction books were bestsellers in the UK, and he writes frequently for American and British publications. He now lives with his wife, Diane Meier, in New York and Connecticut. Ireland is his first novel to be published in the United States.