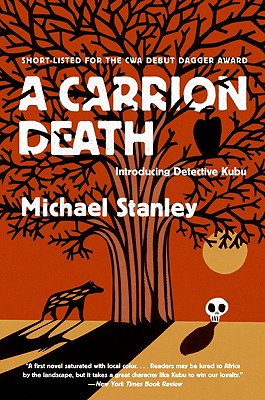 Smashed skull, snapped ribs, and a cloying smell of carrion. Leave the body for the hyenas to devour—no body, no case.

But Kalahari game rangers stumble on the human corpse mid-meal. The murder wasn't perfect after all. Enter Detective David "Kubu" Bengu of the Botswana Criminal Investigation Department, an investigator whose personality and physique match his moniker, the Setswana word for hippopotamus—which is a seemingly docile beast, but one of the deadliest, and most persistent, on the continent.

Beneath a mountain of lies and superstitions, Kubu uncovers a chain of crimes leading to the most powerful figures in the country—cold-bloodedly efficient and frighteningly influential enemies who can make anyone who gets in their way disappear.

“A first novel saturated with local color. . . . Readers may be lured to Africa by the landscape, but it takes a great character like Kubu to win our loyalty.” — New York Times Book Review

“Delightful. . . . Plot twists are fair and well-paced, the Botswana setting has room to breathe and take shape as its own entity, and Stanley’s writing style is equal parts sprightly and grave.” — Los Angeles Times Book Review