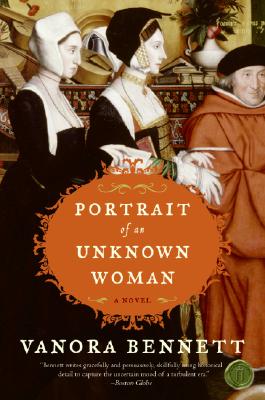 Portrait of an Unknown Woman (Paperback)

In the year 1527, the great portraitist Hans Holbein, fleeing the Protestant Reformation, comes to England under commission to Sir Thomas More. Over the course of the next six years, Holbein paints two nearly identical portraits of the More family, his dear and loyal friends. But closer examination of the second painting reveals several mysteries. . . .

Set against the turmoil and tragedy of Henry VIII's court, Portrait of an Unknown Woman vividly evokes sixteenth-century England on the verge of enormous change—as viewed through the eyes of Meg Giggs, More's intelligent, tenderhearted, headstrong adopted daughter, who stands at the center of this sweeping, extraordinary epic. It is a tale of sin and religion, desire and deception—the story of a young woman on the brink of sensual awakening and a country on the edge of mayhem.

Vanora Bennett is the author of two acclaimed novels, Portrait of an Unknown Woman and Figures in Silk, and an award-winning journalist. She has contributed to the Los Angeles Times, the Times Literary Supplement, The Times (London), and the BBC. She lives in North London with her husband and two children.

Could Meg Giggs be considered a “modern woman”? Why or why not?

Is it possible to fully understand the conflicts of an earlier age? What does it mean to learn from history?

Fathers and daughters—discuss this relationship and its manifestations in the novel. Has Meg and More’s relationship changed by the end?

What role does religion play in the novel?

Is there a “female” and a “male” side of medicine? Is there a difference between nursing and care given by physicians?

Holbein was one of the first painters to “see God in the human face” and paint works without religious subjects. Did art gain or lose by being decoupled from religious worship in the 16th century?

Does the smaller size of most families today, as opposed to the larger family structures of the 16th century, mean there’s less strife and sibling rivalry? Why or why not?

Can you lead an honest life if you’re harboring a secret?

Do you agree or disagree with Meg’s choices in the novel?

Does More deserve his fate?