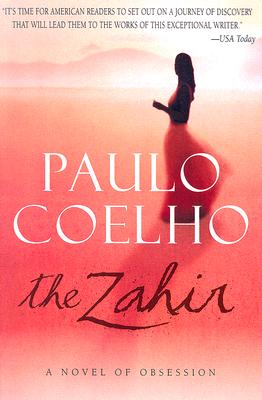 Set in Paris and in the enchanting landscape of central Asia, this new novel by the author of the international bestsellers The Alchemist and Eleven Minutes follows the journey of a man obsessed with finding the wife who left him without an explanation.

The narrator of The Zahir is a bestselling novelist who lives in Paris and enjoys all the privileges that money and celebrity bring. His wife of ten years, Esther, is a war correspondent who, despite her professional success and freedom from the conventional constraints of marriage, is facing an existential crisis. When she disappears along with a friend, Mikhail, who may or may not be her lover, the authorities question the narrator. Was Esther kidnapped, killed, or did she simply abandon a marriage that left her unfulfilled? The narrator doesn't have any answers but he has plenty of questions of his own.

Then one day Mikhail, the man with whom Esther was last seen, finds the narrator and promises to take him to his wife. In his attempt to recapture a love lost, the narrator discovers something unexpected about himself.

A haunting and redemptive story about the dark side of obsession, The Zahir explores its potential to both fulfill our dreams and to destroy them. It is also a thoughtful meditation on faith, celebrity, marriage -- and their relationships to freedom and creativity.


Praise For The Zahir…

“Coelho is a novelist who writes in a universal language.”
— New York Times

“Fans of Paulo Coelho will love this eloquent meditation on commitment--as will anyone who’s ever been in a relationship.”
— Marie Claire

“If you read Coelho’s book The Alchemist, then you should definitely read this.... There’s really no one else like him.”
— Vibe

“Likely to entrance even the most cynical of readers.”
— Bloomberg.com

“An enlightening story of faith and the reclamation of pure love.”
— Library Journal

“A fast-moving, captivating, both satirical and thoughtful novel about love and desire.”
— Edmonton Journal (Alberta)