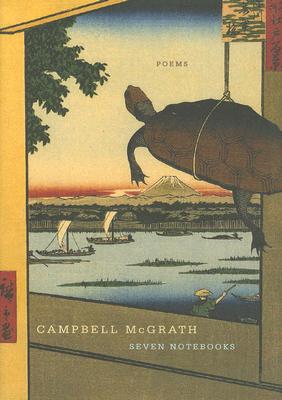 An ant to the stars
or stars to the ant—which is
more irrelevant?

Weekend Jet Skiers—
rude to call them idiots,
yes, but facts are facts.

Clamor of seabirds
as the sun falls—I look up
and ten years have passed."
—from "Dawn Notebook"

Such is the expansive terrain of Seven Notebooks: the world as it is seen, known, imagined, and dreamed; our lives as they are felt, thought, desired, and lived. Written in forms that range from haiku to prose, and in a voice that veers from incanta­tory to deadpan, these seven poetic sequences offer diverse reflections on language and poetry, time and consciousness, civilization and art—to say nothing of bureaucrats, surfboards, and blue margaritas. Taken collectively, Seven Notebooks composes a season-by-season account of a year in the life of its narrator, from spring in Chicago to summer at the Jersey Shore to winter in Miami Beach. Not a novel in verse, not a poetic journal, but a lyric chronicle, this utterly unique book reclaims territory long abandoned by American poetry, a characteristic ambition of Campbell McGrath, one of the most honored, accessible, and humanistically engaged writers of our time.

Campbell McGrath is the author of nine previous books, eight of them available from Ecco Press. He has received numerous prestigious awards for his poetry, including a MacArthur Foundation “genius grant,” and a Guggenheim Fellowship. He has been published in the New York Times, Harper’s Magazine, the Paris Review, the New Yorker, Poetry, and Ploughshares, among other prominent publications, and his poetry is represented in dozens of anthologies. He teaches in the MFA program at Florida International University, and lives with his family in Miami Beach.