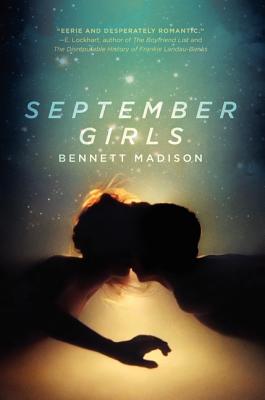 September Girls is a stunning coming-of-age novel about first loves, oblivious parents, sibling rivalries—and mermaids. This imaginative and painfully honest book garnered five starred reviews, including one from ALA Booklist that proclaimed it "a rare and lovely novel, deserving of attention from discriminating readers."

Whisked away by his father to an unusual beach town in the Outer Banks, Sam finds himself having the summer vacation most guys dream of. He's surrounded by beautiful blonde girls, and, better yet, they all seem inexplicably attracted to him. But there's definitely something strange about the Girls. They only wear flats because heels make their feet bleed. They never go swimming in the water. And they all want something from him.

Sam falls for one of the Girls, DeeDee, and begins an unexpected summer romance. But as they get closer, she pulls away without explanation. Sam knows that if he is going to win her back, he'll have to learn the Girls' secret.

Bennett Madison, critically acclaimed author of The Blonde of the Joke, brings a mix of lyrical writing, psychologically complex characters, and sardonic humor to this young adult novel. September Girls is perfect for fans of the irreverent wit of Ned Vizzini and the seductive magic of fairy tales retold.

PRAISE FOR SEPTEMBER GIRLS: “Eerie and desperately romantic, September Girls is a myth measured out in summer days, game shows, French fries and women’s magazines. Bennett Madison makes a seedy beach town into the stuff of legends, and he has worked an intoxicating magic. Amazing.”
— E. Lockhart, New York Times bestselling author of We Were Liars and The Disreputable History of Frankie Landau-Banks

“Reading this book is like holding your breath underwater—you won’t want to come up for air.”
— Jenny Han, New York Times bestselling author of To All the Boys I've Loved Before and The Summer I Turned Pretty trilogy

“I came away enthralled by this transfixing story and overcome by Bennett Madison’s breathtaking talent as a writer. Gorgeously rendered and teeming with shocks and deep truths, September Girls is a daring book that reveals the boundless possibilities of YA fiction.”
— Nova Ren Suma, #1 New York Times bestselling author of The Walls Around Us and Imaginary Girls

“Beneath the dreamy warmth and languor of beach days and summer romance, September Girls delivers an intricate story of identity and freedom, the ties and histories that thwart those things, and love. A truly original coming-of-age tale.”
— Sara Zarr, author of the National Book Award finalist Story of a Girl

“A meditation on manhood takes a turn into magical realism in this mesmerizing novel.”
— Kirkus Reviews (starred review)

“Madison maintains the same hazy, syrupy languidness that distinguished The Blonde of the Joke. A surprising story of a kid finding love and himself, when he wasn’t looking for either.”
— Publishers Weekly (starred review)

“Madison’s novel offers up a feast of mythology and human nature. This isn’t just a supernatural beach read; it’s a rare and lovely novel, deserving of attention from discriminating readers.”
— Booklist (starred review)

“An exquisitely haunting work of magical realism.”
— Bulletin of the Center for Children’s Books (starred review)

“A wry, sharp read. Spend the weekend unraveling its mystery, and you’ll set the tone nicely for your own sexy summer.”
— MTV.com

“Madison’s writing is somehow both dreamy and razor-sharp, like the ocean that laps quietly in the background. Teens and adults alike will be spooked and intrigued in equal parts as the book works toward an ending as satisfying and heartbreaking as the end of a sleepy summer.”
— Shelf Awareness

“The depictions of young flirtation and sexual frustration are right on point and may be the truest imitations of it I’ve read yet.”
— BookPage

“An odd and beautiful and risky novel. From Madison, I wouldn’t expect any other kind.”
— Locus

PRAISE FOR THE BLONDE OF THE JOKE: “Off-kilter humor, moody narration, and twisted psychology make this sardonic exploration of suburbia thrilling-like pocketing lip gloss and walking right out of the store.”
— School Library Journal

“This wickedly funny novel has it all—style, depth, bite, and a punch line you won’t be able to forget.”
— Sarah Mlynowski, author of Ten Things We Did (and Probably Shouldn't Have)

“The Blonde of the Joke turns a dull suburban landscape into a mythical place, full of treasure, inner demons, and transformations. Bennett Madison is one of the best YA writers around and this is his sharpest book to date.”
— Maureen Johnson, New York Times bestselling author of The Name of the Star

“A ridiculous, riotous, tongue-in-cheek mad dash through the mall where everything is not as it seems and where the cheap jokes and the bounty grow like apples on trees.”
— Kirkus Reviews

“You will fall in love with The Blonde of the Joke the moment you enter its mall-wandering, skater-boy loving, dark secret-hiding world. Poetic and punchy, sarcastic and true, I gobbled this up and was left wanting so much more.”
— Sara Shepard, author of the New York Times bestselling Pretty Little Liars series

“Madison’s honest and darkly comic prose takes this mall-rat tale to mythical heights. The punchline is definitely bittersweet and will leave a good many readers anticipating Madison’s next book.”
— Booklist

“Madison’s dreamlike prose imbues the most ordinary moments with cosmic significance. Readers will soak up every bit.”
— Publishers Weekly

Bennett Madison is the author of several books for young people, including The Blonde of the Joke. He attended Sarah Lawrence College but remains two classes shy of graduation. He lives in Brooklyn, New York.