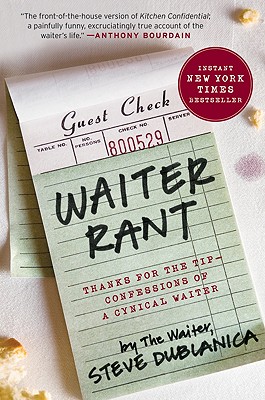 Thanks for the Tip--Confessions of a Cynical Waiter

“Reading this entertaining front-of-house answer to Kitchen Confidential reminded me of all the summers I spent waiting tables -- and reminded me to tip more generously.”
— Cheryl Patton, Eclipse Coffee & Books, Inc, Montevallo, AL
View the List

“Reading this entertaining front-of-house answer to Kitchen Confidential reminded me of all the summers I spent waiting tables -- and reminded me to tip more generously.”
— Cheryl Patton, Eclipse Coffee & Books, Montevallo, AL
View the List

According to The Waiter, 80 percent of customers are nice people just looking for something to eat. The remaining 20 percent, however, are socially maladjusted psychopaths.

Eye-opening, outrageous, and unabashed—replete with tales of customer stupidity, arrogant misbehavior, and unseen tidbits of human grace in the most unlikely places—Waiter Rant presents the server's unique point of view, revealing surefire secrets to getting good service, proper tipping etiquette, and ways to ensure that your waiter won't spit on your food.


Praise For Waiter Rant: Thanks for the Tip--Confessions of a Cynical Waiter…

“…amusing and informative…along with the stories, some of which are hilarious, Dublanica provides useful advice for the customer...Waiter Rant is as delightful as it is irreverent.” — Washington Post Book World

“Writing a best-seller is a big deal, and the Waiter deserves a 20% tip for serving up such a fun summer read.” — Forbes.com

“Anyone that has ever eaten in a restaurant is going to want to grab [this book].” — Matt Lauer, The Today Show

“For enlightenment on how to handle such situations, I reached out to The Waiter. You know, the New York City-based guy who created the wildly entertaining Waiter Rant blog, which is now a cannot-put-it-down book.” — Seattle Post-Intelligencer

“…here is my unabashed recommendation: If you eat out with any regularity, read this book!” — Chicago Sun-Times

“Waiter Rant has all the fixings for fun....What Anthony Bourdain’s tell-all about life in the kitchen did for Hollandaise sauce, Waiter Rant will do for side salads.” — Los Angeles Times

“Lucky for the reader, The Waiter has kept his eyes open and is willing to gossip about what he has seen from the other side of the menu.” — Tampa Tribune

“Fortunately, The Waiter (who has since outed himself as a chap called Steve Dublanica) does more in this book than get even; he provides thoughtful insights into how the restaurant business works.” — Bloomberg News

The front-of-the-house version of Kitchen Confidential; a painfully funny, excruciatingly true-life account of the waiter’s life. As useful as it is entertaining. — Anthony Bourdain

“The main attraction here is [Dublanica’s] acerbic, biting and often hilarious accounts of life behind the scenes at the front of the house.” — Wall Street Journal

Steve Dublanica is the bestselling author of Waiter Rant, which spent twelve weeks on the New York Times bestseller list. He lives in the New York metropolitan area with his joint-custody dog, Buster.