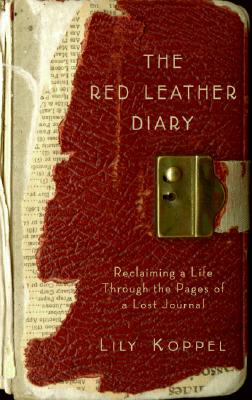 Reclaiming a Life Through the Pages of a Lost Journal

“A world straight from the pages of an F. Scott Fitzgerald novel. . . . An extraordinary story about coming of age, following your dreams and discovering (or rediscovering) who you are, were and want to be.” — Parade

Rescued from a Dumpster on the Upper West Side of Manhattan, a discarded diary brings to life the glamorous, forgotten world of an extraordinary young woman

Opening the tarnished brass lock of a red leather diary found in the basement of a New York City apartment building, New York Times writer Lily Koppel embarked on a journey into the past. Compelled by the hopes and heartaches captured in the pages, Koppel set out to find the diary’s owner, a 90-year old woman named Florence. Eventually reunited with her diary, Florence ventured back to the girl she once was, rediscovering a lost self that burned with artistic fervor.

Joining intimate interviews with original diary entries, The Red Leather Diary is an evocative and entrancing work that recreates the romance and glitter, sophistication and promise, of 1930s New York, bringing to life the true story of a precocious young woman who dared to follow her dreams.


Praise For The Red Leather Diary: Reclaiming a Life Through the Pages of a Lost Journal…

“Skillful reporting, fine prose and [an] excellent eye for period detail. . . . A story about not one but two lovable characters—and the city that brought them together.”
— New York Times Book Review

“A novelistic biography. . . . Conjures up a romantic version of the Manhattan of Howitt’s youth.”
— Washington Post Book World

“A world straight from the pages of an F. Scott Fitzgerald novel. . . . The Red Leather Diary is Koppel’s tribute to both the tempestuous girl she came to know on paper and the older, more even-tempered women she grew to love in real life. It’s an extraordinary story about coming of age, following your dreams and discovering (or rediscovering) who you are, were and want to be.”
— Parade

“Florence’s life reads like E.L. Doctorow’s Ragtime in places, with all the famous paths crossed and situations experienced; while descriptions of city life recall Marjorie Hart’s Summer at Tiffany... Together, Koppel and Florence take readers through a world dizzy with new ideas, rhythms and inventions.”
— BookPage

“After a front-page story appeared in the New York Times Sunday City section, interest in Florence’s fascinating story prompted the author to write a full-length book that works as both a biography and a spellbinding glimpse into a vanished era.”
— Booklist

“Koppel’s love of New York is obvious in the details she draws from Florence’s diary, which show how the city has changed in ways both big and small. An entertaining and enjoyable work.”
— Library Journal

“In The Red Leather Diary, Lily Koppel finds an old journal in a Dumpster, gets lost in its rich take on 1930s New York and, improbably, tracks down the now-90-year-old woman whose life—real and imagined—fills its worn pages.”
— Reader's Digest (Editors' Choice)

Lily Koppel writes for the New York Times and other publications. She lives in New York City.