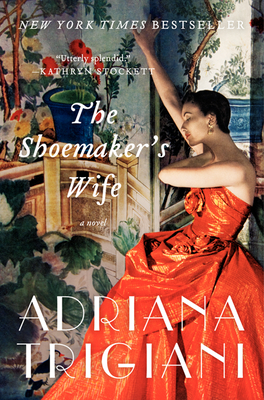 Trigiani’s biggest novel to date--a breathtaking multi-generational love story that spans two continents, two World Wars, and two oceans, replete with the all the drama, sumptuous detail and heart-stopping romance that have made her “One of the reigning queen’s of women’s fiction” (USA Today).

Beloved New York Times bestselling author Adriana Trigiani returns with the most epic and ambitious novel of her career—a breathtaking multigenerational love story that spans two continents, two World Wars, and the quest of two star-crossed lovers to find each other again. Fans of Trigiani’s sweeping family dramas like Big Stone Gap and Lucia, Lucia will love her latest masterpiece, a book Kathryn Stockett, author of The Help, calls “totally new and completely wonderful: a rich, sweeping epic which tells the story of the women and men who built America dream by dream.”


Praise For The Shoemaker's Wife: A Novel…

“Within the pages of this novel, Trigiani’s 10th, is a gloriously romantic yet sensible world that seamlessly blends practicality and beauty…built around the staggering cultural and social changes the war years swept in…. Trigiani’s very best…exquisite writing and a story enriched by the power of abiding love.” — USA Today

“I’ve always loved reading Trigiani, but [this] is something totally new and completely wonderful: a rich, sweeping epic which tells the story of the women and men who built America dream by dream. If you’re meeting her work for the first time, get ready for a lifelong love affair. Splendid.” — Kathryn Stockett, #1 New York Times bestselling author of The Help

“You’ll have trouble putting this novel down.” — Richmond Times-Dispatch

“The novel is a sweeping epic, but at its heart, it’s a love story. It speaks to an era of possibilities.” — Providence Journal

“Trigiani’s page-turning newest… is a sweeping saga… More than an epic romance, Trigiani’s work pays homage to the tribulations of the immigrant experience, and the love that makes the journey and hardships worthwhile.” — Publishers Weekly

“This expansive epic, which seems tailor-made for a miniseries, manages to feel both old-fashioned and thoroughly contemporary…[an] irresistible love story.” — Booklist

“Trigiani’s gift for using vivid details to create a strong sense of place and her warm affection for her characters will make this a satisfying read for her many fans.” — Library Journal

…an old-fashioned, romantic tale of two star-tangled lovers...but also a paean to artisanal work, food, friendship and family…Trigiani is a master of palpable and visual detail. — Washington Post

How would the course of both Ciro's and Enza's lives have been different if they hadn't gone to America? Do you think they would have ended up together if they had stayed on the mountain?

Enza and Ciro shared their first kiss beside Stella's grave. In what ways did digging the grave open up Ciro's heart?

When Ciro opened up his duffle bag on the ship to America, “the fragrance of the convent laundry—lavender and starch—enveloped him, fresh as the mountain air of Vilminore” (p. 120). What other aspects of convent life stayed with Ciro and Eduardo after they left? What did they learn from the sisters?

Enza “found a best friend in Laura, but so much more” (p. 195). What do you think made Laura and Enza's bond so deep from the beginning? In what ways did they support one another?

Did anything surprise you about the characterization of Enrico Caruso? How would you describe his relationship with those around him? How did the time he spent with Enza and Laura affect them, even decades later?

How does The Shoemaker's Wife portray the immigrant experience? Do any of your own families have a similar immigrant history? Did they have a different experience?

Enza and Ciro have different views of religion. In what ways do their beliefs shape their actions and relationship?

How do you think Enza's life would have turned out if she had married Vito? If Ciro had married Felicitá? What did Vito and Felicitá offer them and what did they lack?

Carlo Lazzari warned Eduardo to “beware the things of this world that can mean everything or nothing”. In what ways did this advice ring true throughout the novel?

What effect did fighting in the Great War have on Ciro? Do you believe he returned to Manhattan a changed man, or did the war just force him to acknowledge what he had known all along?

Enza once said to Ciro: “I remind you, I imagine, of things you'd rather not think about.” What do you believe Enza meant by this? What challenges did Ciro and Enza face in their relationship? How did they differ in their ways of communicating?

At the end of the novel, Enza agrees to return to Italy with Antonio and Angela. How do you imagine the reunion between Enza and her family? How will Schilpario be different for Enza when seen through Angela and Antonio's eyes?