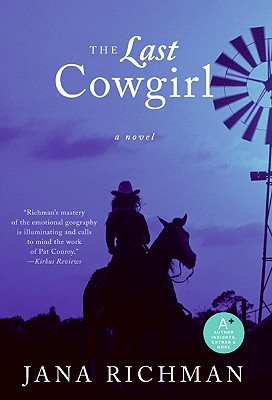 Dickie Sinfield was seven years old when her father uprooted the family from their comfortable suburban home and moved them to a small, run-down ranch in Clayton, Utah, where he could chase his dream of  being a cowboy. Dickie always hated the cattle-ranching lifestyle, and as soon as she turned eighteen she fled for the comforts of the city.

Now a grown woman, a respected journalist in Salt Lake City, Dickie is coming home following the tragic, accidental death of her brother. Suddenly back in the farmhouse she was once so desperate to abandon—emotionally exposed by, yet reluctantly drawn to the vast, desolate landscape and the solitude it offers—she must confront her family's past . . . and the horrifying discovery at the pivotal moment of her childhood that ultimately forced her to run from the desert.

Spanning two generations and vast landscapes, a novel that fans of Pam Houston and Barbara Kingsolver will eagerly embrace, Jana Richman's The Last Cowgirl will strike a powerful chord with anyone who has ever searched for solace in the space around them.


Praise For The Last Cowgirl: A Novel…

“Richman’s mastery of the emotional geography is illuminating and call(s) to mind the work of Pat Conroy.”
— Kirkus Reviews

“Rich characterizations and vivid sense of place. One of the year’s finest works of local fiction.”
— Salt Lake City Weekly

“A warm story of good folks who make bad decisions and then have to live with them.”
— Publishers Weekly

“Readers will be irrevocably drawn into this top-notch fictional debut from an amazing new talent.”
— Booklist

“ Engrossing. The narrative touches on complexities and contradictions that touch so many lives: steadfast patriotism vs. threatening governmental action; urban Mormonism vs. its earthier rural equivalent; and people vs. a past that can leave them with heavy baggage. With lovely specificity, Richman manages to tell a true Utah story.”
— Salt Lake City Weekly, 2008 ARTYS Awards (Winner, Best Fiction Book)

Jana Richman lives in Salt Lake City with her husband, Steve Defa. She is the author of the memoir, Riding in the Shadows of Saints: A Woman's Story of Motorcycling the Mormon Trail. She invites readers to e-mail her at lastcowgirl@comcast.net.

The death of Dickie’s brother, Heber, sets off a chain reaction in Dickie’s life. Why would Heber’s death trigger such a strong reaction from Dickie when her mother Ruth’s death did not? Would Dickie have returned to Clayton if Heber hadn’t died?

Throughout her life Dickie’s relationships with other women have been complex. How did Dickie’s friendship with Holly shape her life and her decisions? How would you describe the relationship between Bev and Dickie? At one point Bev says to Dickie, “You often step aside when you ought to be stepping up.” What does she mean by this?

“I’m very near the edge of living life in the abyss between my mother’s sadness and my father’s stubbornness.” What does Dickie mean by this? How are pieces of Ruth and George portrayed in Dickie? In all their children?

The landscape in the novel is vividly rendered and it plays an important role—almost like an additional character. Each character also has a complex relationship with the Utah countryside. How have their lives, particularly Dickie’s, been shaped by the land, or by a separation from it? Could Stumpy ever be separated from the place? In other words, could Stumpy have moved into Salt Lake City and lived happily with Dickie?