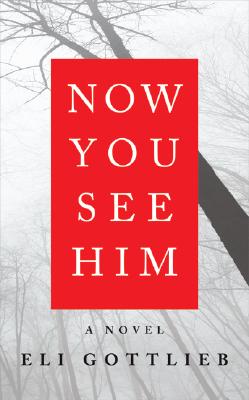 Now You See Him (Hardcover)

“In Now You See Him, Eli Gottlieb takes readers deep inside the human heart and asks the question, 'How well do we know the people we love most?' This is one of those novels that remains with you long after you have read the last line.”
— Kathleen Caldwell, A Great Good Place for Books, Oakland, CA
View the List

“This nuanced, intelligent novel is told from the point of view of Nick, a man in his thirties facing a collapsing marriage, and life, as tragic events send him on a completely new road. Richly written, this thrilling novel's twists and revelations gloriously delve into the nature of truth, friendship, marriage, and our own perceptions of ourselves.”
— Joe Eichman, Tattered Cover Bookstore, Denver, CO
View the List

His name was Rob Castor. Quite possibly, you've heard of him. He became a minor cult celebrity in his early twenties for writing a book of darkly pitch-perfect stories set in a stupid upstate New York town. About a dozen years later, he murdered his writer-girlfriend and committed suicide. . . .

The deaths of Rob Castor and his girlfriend begin a wrenching and enthrallingly suspenseful story that mines the explosive terrains of love and paternity, marriage and its delicate intricacies, family secrets and how they fester over time, and ultimately the true nature of loyalty and trust, friendship and envy, deception and manipulation.

As the media takes hold of this sensational crime, a series of unexpected revelations unleashes hidden truths in the lives of those closest to Rob. At the center of this driving narrative is Rob's childhood best friend, Nick Framingham, whose ten-year marriage to his college sweetheart is faltering. Shocked by Rob's death, Nick begins to reevaluate his own life and his past, and as he does so, a fault line opens up beneath him, leading him all the way to the novel's startling conclusion.

In this ambitious and thrilling novel, award-winning author Eli Gottlieb--with extraordinarily luxuriant and evocative prose--takes us deep into the human psyche, where the most profound of secrets are kept.