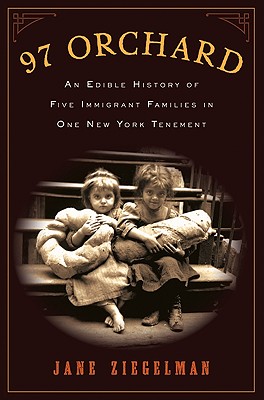 “Social history is, most elementally, food history. Jane Ziegelman had the great idea to zero in on one Lower East Side tenement building, and through it she has crafted a unique and aromatic narrative of New York’s immigrant culture: with bread in the oven, steam rising from pots, and the family gathering round.” — Russell Shorto, author of The Island at the Center of the World

97 Orchard is a richly detailed investigation of the lives and culinary habits—shopping, cooking, and eating—of five families of various ethnicities living at the turn of the twentieth century in one tenement on the Lower East Side of Manhattan. With 40 recipes included, 97 Orchard is perfect for fans of Rachel Ray’s Hometown Eats; anyone interested in the history of how immigrant food became American food; and “foodies” of every stripe.