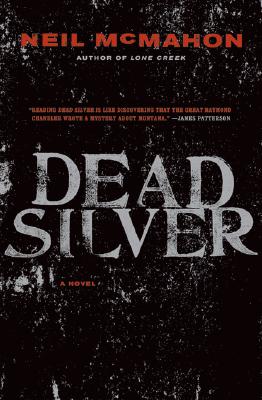 Their first appearance in Lone Creek helped garner McMahon the most extraordinary reviews of his career. None other than mystery guru Otto Penzler said: "It is the poignant and knowing prose that elevates this novel to literature. What separates this book from other outstanding crime novels is the moral might of the hero—and he is a hero, just as Philip Marlowe, Lew Archer, Spenser, Harry Bosch, and C. W. Sugrue are. Davoren believes in friendship, his word, honor, and the earth—the bleak but beautiful mountainous west."

Dead Silver begins with a distraught call to Hugh Davoren from the daughter of a famous professor when she finds a wooden box containing disturbing photos and an earring that belonged to her stepmother, murdered after protesting the opening of a silver mine.

With his trademark descriptions of the well-to-do and the down-and-out, McMahon brings in a cast of colorful characters who support and oppose Hugh and his friend Madbird—plenty of people who may have had a hand in the murder cases that these photos have reopened. And Hugh's judgment could be clouded by his feelings for the professor's vulnerable but feisty daughter, who is trying to draw the killer out on her own.

Neil McMahon holds a degree in psychology from Stanford and was a Stegner fellow. He has published ten novels, in addition to the bestselling thriller Toys, coauthored with James Patterson. He lives in Missoula, Montana, where his wife directs the annual Montana Festival of the Book.


Praise For Dead Silver: A Novel…

“Reading DEAD SILVER is like discovering that the great Raymond Chandler wrote a mystery about Montana. ”
— James Patterson

“Imagine the Lone Ranger and Tonto as a pair of witty, profane, shot-and-beer construction workers. . . It’s a terrific read-worldly-wise, scary, and as fast moving as a runaway truck on a steep mountain grade.”
— Larry Watson, author of Montana 1948
or
Not Currently Available for Direct Purchase
Copyright © 2020 American Booksellers Association