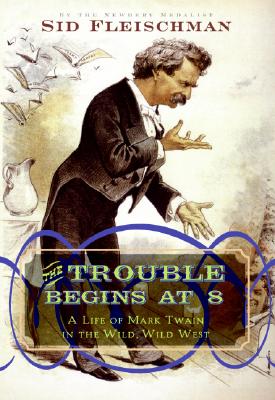 The Trouble Begins at 8

A Life of Mark Twain in the Wild, Wild West

"Mark Twain was born fully grown, with a cheap cigar clamped between his teeth." So begins Sid Fleischman's ramble-scramble biography of the great American author and wit, who started life in a Missouri village as a barefoot boy named Samuel Clemens.

Abandoning a career as a young steamboat pilot on the Mississippi River, Sam took a bumpy stagecoach to the Far West. In the gold and silver fields, he expected to get rich quick. Instead, he got poor fast, digging in the wrong places. His stint as a sagebrush newspaperman led to a duel with pistols. Had he not survived, the world would never have heard of Tom Sawyer or Huckleberry Finn—or red-headed Mark Twain.

Samuel Clemens adopted his pen name in a hotel room in San Francisco and promptly made a jumping frog (and himself) famous. His celebrated novels followed at a leisurely pace; his quips at jet speed. "Don't let schooling interfere with your education," he wrote.

Here, in high style, is the story of a wisecracking adventurer who came of age in the untamed West; an ink-stained rebel who surprised himself by becoming the most famous American of his time. Bountifully illustrated.


Praise For The Trouble Begins at 8: A Life of Mark Twain in the Wild, Wild West…

“With a Twainian lilt to the prose, the book mingles deftly shaped research with snippets from Twain’s writings.”
— Booklist (starred review)

“This biography of the writer who ‘changed literature forever’ sets a standard few can meet: it is top-notch entertainment.”
— Publishers Weekly (starred review)

“The illustrations and photographs are rich and varied, and the back matter is a work of art in itself.”
— School Library Journal (starred review)

“The trouble—entertaining trouble indeed—begins on page one as Fleischman brings our national comedic treasure to life.”
— The Horn Book

“What truly sets this biography in a class by itself…is how enthusiastically Fleischman assumes Twain’s tone.”
— Bulletin of the Center for Children’s Books