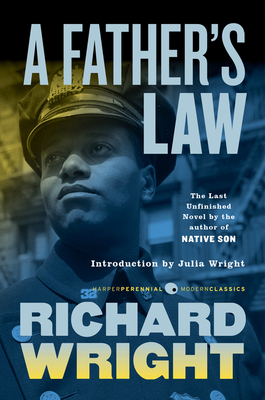 “An intense, provocative, and vital crime story that excavates paradoxical dimensions of race, class, sexism, family bonds, and social obligation while seeking the deepest meaning of the law." — Booklist

Originally published posthumously by his daughter and literary executor Julia Wright, A Father’s Law is the novel Richard Wright, acclaimed author of Black Boy and Native Son, never completed. Written during a six-week period prior to his death in Paris in 1960, it offers a fascinating glimpse into the writer’s process as well as providing an important addition to Wright’s body of work.

In rough form, Wright expands the style of a crime thriller to grapple with themes of race, class, and generational conflicts as newly appointed police chief Ruddy Turner begins to suspect his own son, Tommy, a student at the University of Chicago, of a series of murders in Brentwood Park. Under pressure to solve the killings and prove himself, Turner spirals into an obsession that forces him to confront his ambivalent relationship with a son he struggles to understand.

Prescient, raw, and powerful, A Father's Law is the final gift from a literary giant.


Praise For A Father's Law…

“Wright’s masterful depiction of Turner’s states of mind and Tommy’s catalytic antagonism leads us into a vortex. . . . The novel is a summation of Wright’s aesthetic.” — Jerry W. Ward, Jr., Natchez Democrat

"A powerfully written, compelling crime novel. Richard Wright’s final work, including its moving introduction by his daughter Julia, is a fitting tribute to the centennial of this great writer’s birth. His voice, above all others, reveals the searing pain and anger of black consciousness in America." — William Ferris, University of North Carolina at Chapel Hill

“A Father’s Law is vintage Richard Wright: the emotion, the intensity, the suspense make it of a piece with Wright’s major novels and short stories. It is a gripping tale of fear, uncertainty and confusion.” — Amritjit Singh

"Compelling draft that comes to us in a forward-moving style with prose that’s easy to engage and characters difficult to ignore. As a proud Catholic Republican policeman, Rudy is a fascinating figure, one of Wright’s most interesting inventions. And the enigmatic, brilliant, distressed Tommy is a perfect match for the father as one rises in the world and the other sinks. If Wright had lived to finish this book, we might have had another masterpiece on our hands. As it stands, this forceful but unresolved novel calls us back to the earlier work of one of our country’s literary giants." — Alan Cheuse, National Public Radio

“None of the novels Wright published after Native Son compares in depth of character, breadth of narrative, and thematic impact to A Father’s Law. . . . [A] compelling draft composed in a forward-moving style, with prose that’s easy to engage and characters that are difficult to ignore. . . . The book remains much more than a literary curiosity, and even as it gives pleasure in the present moment it calls us back to the earlier work of one of our country’s literary giants.” — Chicago Tribune

“Happily, Richard Wright’s A Father’s Law...is not just a book for critical theorists, nor is it a book that disappoints. . . . Its story...is surprisingly contemporary for one written close to half a century ago. . . . [It] succeeds in its prescient examination of the generational and class conflicts that await black Americans as they move from the margins of society into the cultural mainstream. . . . We can be grateful for what he left behind and for what this book gives us to contemplate.” — Washington Post Book World

“Any undiscovered material from his illustrious career would be considered a literary treasure. . . . [From a] master of psychological torment.” — Seattle Times

Richard Wright won international renown for his powerful and visceral depiction of the black experience. He stands today alongside such African-American luminaries as Zora Neale Hurston, James Baldwin, and Toni Morrison, and two of his books, Native Son and Black Boy, are required reading in high schools and colleges across the nation. He died in 1960.