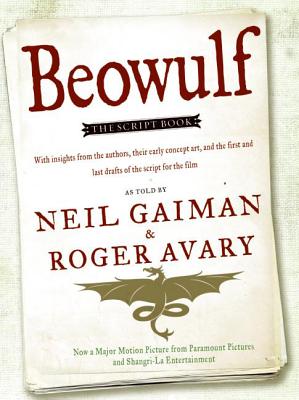 The celebrated heroic epic poem is brought to the the big screen with a script that envisions the trials and tribulations of the noble Beowulf. Thrilling, frightening, and truly epic, Gaiman and Avary have crafted an amazing script with all the adventure of the original that illuminates one of the all-time greatest tales.

In this legend, the outcast monster Grendel attacks Hrothgar’s great hall, devouring many warriors. When the news of Grendel’s onslaught reaches the Geats tribe, their greatest warrior, Beowulf, leaves his homeland to aid those plagued by the monster. But beyond Grendel lie even greater foes and dark secrets that imperil the kingdom. This epic visualization of Beowulf’s combats with Grendel and later, Grendel’s revenge-crazed mother, merges science fiction and fantastic story-telling, bringing to life the most enduring tale of all time.

Roger Avary is the writer-director of the neo-noir crime thriller Killing Zoe and the filmed adaptation of the Bret Easton Ellis novel The Rules of Attraction. He received an Academy Award® for his work as a writer with Quentin Tarantino on Pulp Fiction. Originally from the United States, he now lives in England.