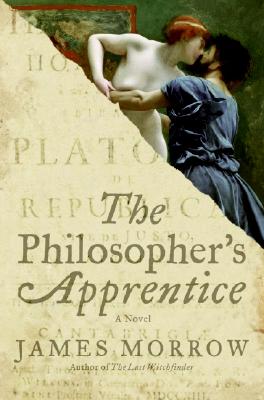 A brilliant philosopher with a talent for self-destruction, Mason Ambrose has torpedoed a promising academic career and now faces a dead-end future. Before joining the ranks of the unemployed, however, he's approached by a representative of billionaire geneticist Dr. Edwina Sabacthani, who makes him an offer no starving ethicist could refuse. Born and bred on Isla de Sangre, a private island off the Florida coast, Edwina's beautiful and intelligent adolescent daughter, Londa, has recently survived a freak accident that destroyed both her memory and her sense of right and wrong. Londa's soul, in short, is an empty vessel--and it will be Mason's job to fill it.

Exploring his new surroundings, our hero encounters a lush Eden abounding in bizarre animals and strange vegetation engineered by Edwina and her misanthropic collaborator, Dr. Vincent Charnock. And Londa, though totally lacking a conscience, proves a vivacious young woman who quickly captivates her new teacher as he attempts to recalibrate her moral compass with the help of Western civilization's greatest ethical thinkers, living and dead.

But there's trouble in this tropical paradise. Mason soon learns that he isn't the only private tutor on Isla de Sangre, nor is Londa the only child in residence whose conscience is a blank slate. How many daughters does Edwina Sabacthani really have, and how did she bring them into being?

Undaunted by these mysteries, Mason continues to instruct Londa, hoping that she can lead a normal life when she eventually ventures forth into human society. His apprentice, however, has a different agenda. Her head crammed with lofty ideals, her heart brimming with fearsome benevolence, and her bank account filled to bursting, Londa undertakes to remake our fallen world in her own image--by any and all means necessary.


Praise For The Philosopher's Apprentice…

"In some ways, [Morrow] reminds me of Mark Twain after the mid-1880s, and even more of Kurt Vonnegut. Like them, Morrow writes with a penetrating moral vision."
-Fort Worth Star-Telegram

"Morrow addresses controversial topics without being heavy-handed, and infuses the narrative with a wit that pragmatists and idealists alike will appreciate. A-"
-Entertainment Weekly

"Morrow is a good as anybody at dramatizing the notion that ideas can both kill us and save us, and THE PHILOSOPHER'S APPRENTICE may well offer about as many provocative ideas per chapter as we'll see in any novel this year."
-Gary K. Wolfe, Locus

"This novel [is] one of Morrow's best . . . the creative exuberances of THE PHILOSOPHER'S APPRENTICE are easily justified by the wisdom they support. For a wise novel, then, wittier and better proportioned than most of its predecessors, due praise."
-Nick Gevers, Locus

"[I]nventive, entertaining . . . fantastic images and ideas . . . Morrow's inventiveness is beguiling, as are his delight in Western philosophy and his concern for the sorry state of the world."
-New York Times Book Review

"[A] tumultuous take on humanity, philosophy and ethics that is as hilarious as it is outlandish . .. [a] wildly ambitious morality play, a shrewd amalgamation of the sacred and the profane. Tips its hat with style to Mary Shelley and George Bernard Shaw."
-Kirkus Reviews

"One of America's premier comic novelists and satirists. . . . Morrow is long overdue for a mainstream audience."
-Denver Post

"[A] hyperkinetic mishmash of horror story, sci-fi yarn, Renaissance allegory, Greek myth and modern morality tale.rollicking.ingenious.it's the fiction equivalent of a roller coaster ride, where readers are meant to hold on tight and enjoy the giddy thrills of an over-the-top and overeducated plot."
-Maureen Corrigan, NPR's Fresh Air on THE PHILOSOPHER'S APPRENTICE

"Morrow may not mention Diderot, but in many ways Morrow is a successor to that finest of Enlightenment thinkers, a man who believed that literature and philosophy marched hand in hand and who was not afraid to discuss serious matters in a comic tone. Enthusiastically recommended for all libraries."
-Library Journal (starred review)

"Morrow's world is one where ideas matter so much they come lurching to life as intellectual Frankenstein creatures. In The Philosopher's Apprentice, they are wickedly hilarious - and then they can break our hearts and scare us silly."
-Denver Post

"[Morrow's] valorization of reason together with his acute sense of comic absurdity have long made him a favorite of intellectuals . . . who see him in the tradition of Twain and Vonnegut."
-Locus

"Morrow is an inventive writer possessing a fine comic sensibility; the story is infused with wit and brio."
-Library Journal (starred review)