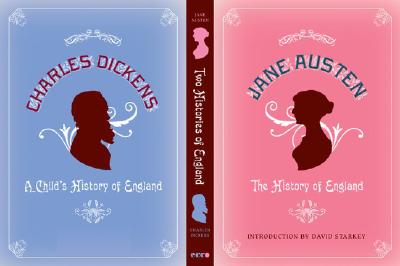 By Jane Austen and Charles Dickens

When she was only sixteen years old, Jane Austen composed her bitingly satirical History of England for performance in her family's drawingroom. A startling and precocious example of her celebrated wit—not to mention a brilliant social commentary—this lively piece sweeps rapidly across almost four centuries of British monarchy. In rambunctious and wickedly funny prose, Austen's critique spans from Henry IV to Charles I, from Richard III to Mary Queen of Scots, offering a fierce parody of the kind of biased history that young ladies of Austen's time were being forced to study. Reproduced here in its entirety, this is a rare, tantalizing look at the great novelist's budding talent, and an extraordinary bit of literary history that lay unpublished for more than 130 years.

Charles Dickens's A Child's History of England, by contrast, was written and published at the height of its author's considerable fame. A gory and dramatic account, full of villains and heroes, the essay was originally intended as a study-piece for his children, but in fact represented a sly, unconventional countertext to the more straitlaced historical canon. Dickens's exciting, flamboyant narrative is hugely evocative, both of the history he describes and of the time in which he himself was writing.

With an insightful introduction by bestselling historian David Starkey, Two Histories of England brings together, in a single, irresistible volume, these remarkable—and remarkably overlooked—literary treasures by two of the world's most beloved writers.

Born in 1775, Jane Austen published four of her six novels anonymously. Her work was not widely read until the late nineteenth century, and her fame grew from then on. Known for her wit and sharp insight into social conventions, her novels about love, relationships, and society are more popular year after year. She has earned a place in history as one of the most cherished writers of English literature.

Charles Dickens (1812-1870) was one of England's greatest writers. Best known for his classic serialized novels, such as Oliver Twist, A Tale of Two Cities, and Great Expectations, Dickens wrote about the London he lived in, the conditions of the poor, and the growing tensions between the classes. He achieved critical and popular international success in his lifetime and was honored with burial in Westminster Abbey.