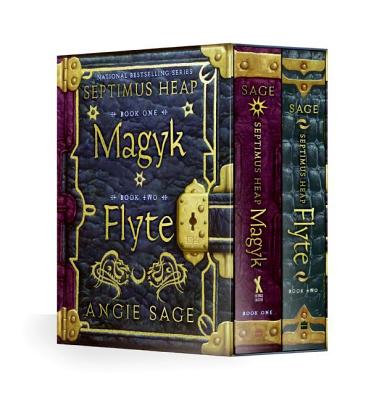 Enter the world of Septimus Heap This box set contains Magyk and Flyte, the first two books in Angie Sage's internationally bestselling Septimus Heap series. Readers will love the enchanting and humorous adventures of a wizard apprentice and his quest to become an ExtraOrdinary Wizard.

-A fresh take on the world of magic.---Child magazine

-Readers will be indubitably hooked--worrying, laughing, and gasping over the nonstop adventures of this engaging troupe.- --VOYA (Starred Review)

The series follows Septimus Heap, who, as a seventh son of a seventh son, has magical powers. After he becomes the apprentice of the ExtraOrdinary Wizard Marcia Overstrand, he starts his studies for seven years and a day to become an Ordinary Wizard (or maybe an ExtraOrdinary?). His adventures take place in a fictional world full of secrets and mysteries, a world where rats are messengers and can speak, a world where spells are common and where the dark forces are trying to penetrate.