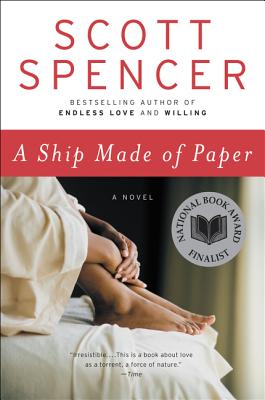 A Ship Made of Paper

Daniel Emerson lives with Kate Ellis, and he is like a father to her daughter, Ruby. But he cannot control his desire for Iris Davenport, the African-American woman whose son is Ruby's best friend. During a freak October blizzard, Daniel is stranded at Iris's house, and they begin a sexual liaison that eventually imperils all their relationships, Daniel's profession, their children's well-being, their own race-blindness, and their view of themselves as essentially good people.


Praise For A Ship Made of Paper: A Novel…

A Ship Made of Paper is an engagingly written, wickedly insightful, and passionate novel about desire, race, and fate.
— Oscar Hijuelos

“Here’s a love story that you can recommend, without blushing, to other adults.”
— Chicago Sun-Times

“A Ship Made of Paper” rocks with suspense and daring.
— Salon.com

The beauty of this novel lies not only in the telling but in its commitment to the passionate life.
— Newsweek

“A searching study of the chaotic side of love.”
— People

Scott Spencer is the author of twelve novels, including Endless Love,Waking the Dead, A Ship Made of Paper, and Willing. He has taught at Columbia University, the Iowa Writers’ Workshop, Williams College, the University of Virginia, and at Eastern Correctional Facility as part of the Bard Prison Initiative. He lives in upstate New York.