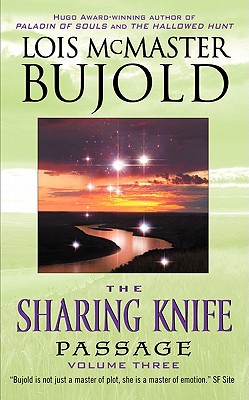 One of the most respected writers in the field of speculative fiction, Lois McMaster Bujold has won numerous accolades and awards, including the Nebula and Locus Awards as well as the fantasy and science fiction genre’s most prestigious honor, the Hugo Award for Best Novel, four times (most recently for Paladin of Souls). With The Sharing Knife series, Bujold creates a brand new world fraught with peril, and spins an extraordinary romance between a young farm girl and the brave sorcerer-soldier entrusted with the defense of the land against a plague of vicious malevolent beings. In Passage, volume three in Bujold’s breathtaking saga of love, loyalty, and courage in the face of bigotry and dark magic, the devoted wedded lovers Fawn Bluefield and Dag Redwing Hickory are joined by new companions in their quest to find peace, acceptance, and a place in a most dangerous world.

“Compelling . . . Bujold excels at creating interesting and sympathetic characters, and this story will satisfy readers who enjoy romance as much as adventure.”
— Publishers Weekly