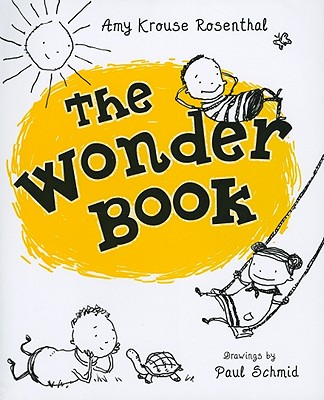 From the beloved New York Times bestselling author of I Wish You More, Amy Krouse Rosenthal, "a joyous, totally original potpourri of stories, poems, lists, palindromes, visual jokes, and random observations about the universal delights and conundrums of childhood."*

Reminiscent of classics like Falling Up from Shel Silverstein, this 80-page black-and-white book is meant for sharing and taps into the delightfully inquisitive world of a child.

Inside you will find stories, short poems, lists, palindromes, visual treats, and random observations. Some parts are happy, some sad-ish, some silly, some serious, some crunchy, some with a soft center.

AMY KROUSE ROSENTHAL wrote more than thirty picture books, including the #1 New York Times bestsellers  Dear Girl, (cowritten with her daughter, Paris Rosenthal) and I Wish You More (co-written with Tom Lichtenheld).  A con­tributor to NPR, TED collaborator and speaker, filmmaker, and the author of two groundbreaking memoirs (Encyclopedia of an Ordinary Life and Textbook Amy Krouse Rosenthal ), she raised her three children with her husband Jason in Chicago. For more about Amy’s life, work, and the Foundation formed in her memory, please see www.amykrouserosenthalfoundation.org.

Paul Schmid's father, grandfather, and great-grandfather were all artists. He is the author and illustrator of A Pet for Petunia, Petunia Goes Wild, and Hugs From Pearl and the illustrator of The Wonder Book by Amy Krouse Rosenthal. In 2010, Paul was awarded a monthlong fellowship with Maurice Sendak. He lives in Seattle with his wife, Linda, and their daughter, Anna.