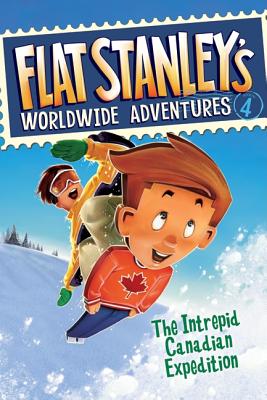 Flat Stanley is taking over the world, one city at a time! In this fun fourth installment in the renowned Flat Stanley’s Worldwide Adventures chapter book series, the Lambchop family goes on a wild adventure in Canada!

Stanley Lambchop and his family are in British Columbia, Canada, for some skiing and winter fun. But when Stanley and his new friend Nick go snowboarding—with Stanley as the snowboard, of course—they take a midair tumble just as the wind picks up . . . and find themselves floating in an amazing Canadian cross-country journey that might just be Stanley's wildest adventure yet!

This unforgettable adventure features fun, fascinating facts about Canada! And for parents and teachers, each Flat Stanley book is aligned to the Common Core State Standards, like multicultural adventure, plot and character development story elements, and compare and contrast! Don’t miss any of Flat Stanley’s worldwide adventures!