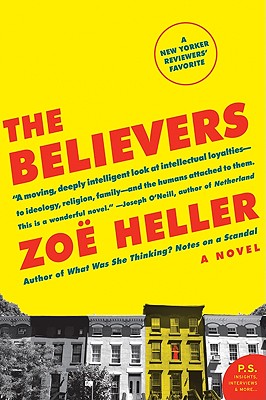 “[Zoe Heller] is an extraordinarily entertaining writer, and this novel showcases her copious gifts, including a scathing, Waugh-like wit.”—New York Times

Best-selling author Zoe Heller has followed up the critical and commercial success of What Was She Thinking? Notes on a Scandal with another tour-de-force on the meaning of faith, belief, and trust: The Believers. Tragic and comic, witty and intense, The Believers is the story of a dysfunctional family forced by tragedy to confront their own personal demons. In the vein of Claire Messud and Zadie Smith, Zoe Heller has written that rare novel that tackles the big ideas without sacrificing page-turning readability.

Zoë Heller is the author of Everything You Know and What Was She Thinking? Notes on a Scandal, which was short-listed for the Man Booker Prize and made into an acclaimed film starring Cate Blanchett and Judi Dench. Heller lives in New York.


Praise For The Believers: A Novel…

“A moving, deeply intelligent look at intellectual loyalties-to ideology, religion, family-and the humans attached to them. This is a wonderful novel.”
— Joseph O'Neill, author of Netherland

“A beautiful, oftentimes hilarious, razor-precise portrait of a family, a city, and an examination of the eternal and universal urge to embrace something, anything, greater than ourselves.”
— Richard Price, author of Lush Life

“Tough, wise and funny. . . . A sustaining, intelligent novel about how the big questions affect and change all our small lives.”
— Anne Enright, author of The Gathering

“Profoundly satisfying. . . . Heller injects that difficult-to-pinpoint something-or-other that elevates soap opera to art. . . . The Believers pulses with . . . something deep and lasting and larger than mere story.”
— Lionel Shriver, author of The Post-Birthday World

Why does Joel Litvinoff propose marriage to Audrey Howard after their first date, and what does his doing so suggest about his character? How typical (or atypical) is their relationship for a couple married some forty years?

How does Rosa feel about her involvement with the girls in East Harlem’s Girl Power? To what extent is she an advocate for them? Does her awareness of race and class differences between her and the girls affect her professionalism?

How does Karla and Mike’s inability to conceive a child after several years of trying affect their marriage? What accounts for their disparate feelings about the possibility of adopting a child?

Why is Karla open to a friendship with Khaled after he insults her by asking directly about her dieting? To what extent does Khaled’s indulgent, unselfconscious attitude toward food enhance his appeal in Karla’s eyes?

How serious is Rosa about becoming an observant Jew? What threatens the possibility of her complete conversion?

What does Berenice Mason’s desire to get to know the Litvinoffs suggest about the nature of her intentions? Which sister has better insight into Berenice’s motives—Karla or Rosa?

How does the backdrop of the 9/11 attacks on New York City color the fictional landscape of The Believers? To what extent do you perceive a generalized anxiety in the world inhabited by the characters of this novel?

What role does Lenny’s trip to Bucks County with Jean play in his development and rehabilitation? Why isn’t Audrey more supportive of his transformation, and of Jean’s role in it?

What does the scene at the end of the novel suggest about Karla’s future? Why do you think the author chose to close with this character, at this moment of her life? How did this closing scene affect your appreciation of The Believers?