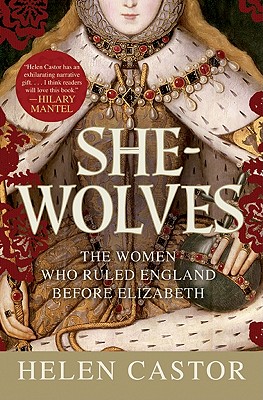 The Women Who Ruled England Before Elizabeth

In the tradition of Antonia Fraser, David Starkey, and Alison Weir, prize-winning historian Helen Castor delivers a compelling, eye-opening examination of women and power in England, witnessed through the lives of six women who exercised power against all odds--and one who never got the chance. Exploring the narratives of the Empress Matilda, Eleanor of Aquitaine, Isabella of France, Margaret of Anjou, and other "she-wolves," as well as that of the Nine Days' Queen, Lady Jane Grey, Castor invokes a magisterial discussion of how much--and how little--has changed through the centuries.


Praise For She-Wolves: The Women Who Ruled England Before Elizabeth…

“A gripping book . . . She-Wolves is a superb history of the powerful women who have surrounded England’s throne, combining blood-drenched drama, politics, sex and swordplay with scholarly analysis, symptahy for the plight of women and elegant writing.”
-Simon Sebag Montefiore, Daily Telegraph (London)

“Beautifully narrated . . . learned and exciting. This is medieval history at its best.”
-Evening Standard

“Castor skillfully combines this analysis with driving narratives, using vivd details from contemporary chronicles to bring those distant days alive. She-Wolves makes one gasp at the brutality of medieval power struggles—and at the strength and vitality of the women who sought to wield royal power.”
-Jenny Uglow, Financial Times

“Castor has done a masterful job of outlining the burdens these women faced. . . . Readers of popular history of British royals will enjoy their immensely human stories.”
-Library Journal