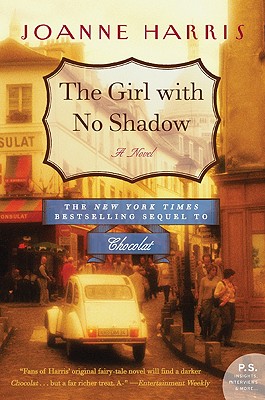 The Girl with No Shadow

The wind has always dictated Vianne Rocher's every move, buffeting her from the French village of Lansquenet-sous-Tannes to the crowded streets of Paris. Cloaked in a new identity, that of widow Yanne Charbonneau, she opens a chocolaterie on a small Montmartre street, determined to still the wind at last and keep her daughters, Anouk and baby Rosette, safe. But the weather vane soon turns, and Zozie de l'Alba blows into their lives. Charming and enigmatic, Zozie provides the brightness that Yanne's life needs—as her vivacity and bold lollipop shoes dazzle rebellious and impressionable preadolescent Anouk. But beneath their new friend's benevolent façade lies a ruthless treachery—for devious, seductive Zozie has plans that will shake their world to pieces.


Praise For The Girl with No Shadow: A Novel…

“A mouth-watering experience.”
— Sunday Times (London) on GIRL WITH NO SHADOW

“Harris once again delivers a delicious urban fairy tale, where killer shoes and Aztec myths battle it out with true love and the seductive power of chocolate.”
— Daily Mail (London) on GIRL WITH NO SHADOW

“A contemporary, razor-edged fairy tale--very dark chocolate but likely to be gobbled up.”
— Kirkus Reviews on GIRL WITH NO SHADOW

“Engaging...colorful...Readers will savor every bite of Harris’ sensuous tale about the dark arts, dark chocolate, and lives both bitter and sweet.”
— Booklist, on THE GIRL WITH NO SHADOW

“Readers will drink up this pleasurable tale of love. Highly recommended.”
— Library Journal, Starred Review, on THE GIRL WITH NO SHADOW

“Harris gives fans much to savor in this multilayered novel, from the descriptions (including Yanne’s mouthwatering chocolate confections, Zozie’s whimsical footwear and Anouk’s artistic efforts) to the novel’s classic, enduring theme of good vs. evil-and the difficulty of telling the difference.”
— Publishers Weekly on GIRL WITH NO SHADOW

“[A] seductive sequel.”
— Good Housekeeping on GIRL WITH NO SHADOW

“[A] provocative sequel to Chocolat, all the sensuous delights from the chocolaterie and the magic of signs, spells and cantrips are revisited…We are held bewitched on a thrilling ride.”
— Louisville Courier Journal on GIRL WITH NO SHADOW

“The fairy tale that Joanne Harris began years ago in Chocolat continues in The Girl With No Shadow, though the taste of this new novel is far more bittersweet...enticing.”
— Daily News (New York) on GIRL WITH NO SHADOW

“Magic and fantasy are at the heart of this fascinating fairy tale for adults.”
— Deseret News on GIRL WITH NO SHADOW

“[A] sweetly enthralling sequel to her 1999 hit, Chocolat...Harris serves up a darkly delightful novel that could as easily be sold in a confectionery as a bookstore.”
— USA Today on GIRL WITH NO SHADOW

“A rich, dark confection.”
— Christian Science Monitor on GIRL WITH NO SHADOW

“[B]eguilingly tasty.
— Richmond Times-Dispatch on GIRL WITH NO SHADOW