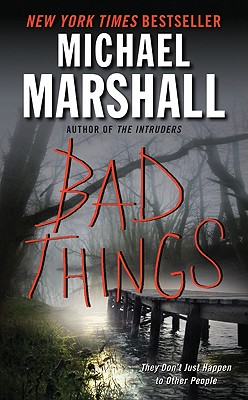 “Marshall recalls Stephen King’s ability to set a story in the world of the commonplace, then suddenly jolt it into a more hellish realm.”

“This spooky tale shows Marshall...has a knack not only for the frisson of dread but also the telling psychological insight.”
— Publishers Weekly on BAD THINGS

“Marshall builds up suspense slowly . . . Black Ridge – like the Maine towns populated by Stephen King’s characters – is not a place you want to visit.”
— Booklist on BAD THINGS

“This is a psychological thriller guaranteed to keep you up at nights.”
— Arcadian Lifestyle

“Fast-moving, sinister and highly accomplished…This is ferocious story-telling of the highest order, with corkscrew twists and turns that make it deliciously scary as the secrets unfold.”
— Daily Mail (London) on BAD THINGS

Michael Marshall is the author of the trilogy that includes The Straw Men, The Upright Man, and Blood of Angels, as well as the stand-alone novels The Servants, The Intruders, Bad Things, and Killer Move. He also works as a screenwriter for clients in London and Los Angeles, and is currently writing a television pilot set in New York City. He lives in London, England, with his wife and son.