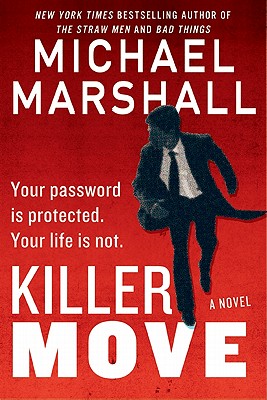 " A] subtle and unnerving story of the little things that can tip the balance of one's life and send it spiraling into chaos."
--Publishers Weekly

Stephen King called Michael Marshall's debut novel The Straw Men, "a masterpiece...brilliantly written and scary as hell." With Killer Move, the acclaimed author of Bad Things and The Intruders demonstrates that he has only gotten better with time. The electrifying story of a man on the fast track to success who finds that his life has been chillingly "modified" by someone, somewhere with a very different master plan for his future, Killer Move is a remarkably intelligent, genuinely creepy thriller from Phillip K. Dick Award-winner Marshall.

“Michael Marshall...is one of those writers who can propel readers along with a rocketing, inventive plot, then stop them cold with a brilliant descriptive line that demands repeated reading....A compelling plot, characters who are completely believable and unforgettable, and sharp, smart insights into the nature of modern life.”
-New Orleans Times-Picayune

“A spooky, mysterious, suspenseful thriller, the kind that keeps you on the edge throughout.”
-Acadiana LifeStyle magazine (New Iberia, LA) on BAD THINGS

“Marshall builds up suspense slowly . . . Black Ridge – like the Maine towns populated by Stephen King’s characters – is not a place you want to visit.”
-Booklist on BAD THINGS

“This spooky tale shows Marshall...has a knack not only for the frisson of dread but also the telling psychological insight.”
-Publishers Weekly on BAD THINGS

“This is a psychological thriller guaranteed to keep you up at nights.”
-Arcadian Lifestyle

“A jaw-dropping mystery that makes a hairpin turn on nearly every page.”
-Entertainment Weekly (Grade A, EW “pick”) on THE INTRUDERS

“[T]his book knows how to tighten your innards. Marshall anchors your sympathy with his characters, and then unravels them in subtle ways with every turn of the screw. ”
-www.blogcritics.com

“[Marshall’s] plots lead straight into the dark woods and have a spooky and paranoid edge....The Intruders...never relents in its own, cold conviction that there is someone dangerous out there.”
-Hobart Mercury (Australia)

“A well-told thriller... [that] has several unexpected curves along the way.”
-Crimespree Magazine on THE INTRUDERS

“A well-constructed, terrifying story...The Intruders is so good, readers will be compelled to check out [Marshall’s] 2002 novel, The Straw Men, which Stephen King called ‘a masterpiece.’”
-USA Today

“A nerve-wracking story full of bizarre twists....Mr. Marshall recalls Stephen King’s ability to set a story in the world of the commonplace, then suddenly jolt it into a more hellish realm. He also has some of Mr. King’s ability to rivet attention with eerie surprises.”
-Janet Maslin, New York Times

“Fast-moving, sinister and highly accomplished…This is ferocious story-telling of the highest order, with corkscrew twists and turns that make it deliciously scary as the secrets unfold.”
-Daily Mail (London) on BAD THINGS

“Fans of King, Koontz, and John Connelly’s supernatural-tinged crime novels should find much to enjoy here....[ Marshall ] infuses his mystery with elements of the fantastic that simmer, chill, and ultimately haunt the memory....Surprises to keep the pages turning right up until the last silky black paragraphs.”
-Mystery Scene on THE INTRUDERS

“Devilishly clever. . . . For fans of Stephen King as well as those of, say, Robert Cras, The Intruders is a tautly crafted page-turner of the first order.”
-BookPage

“Better keep your night-light on.”
-Post-Tribune (Gary, Indiana) on THE INTRUDERS

“Marshall is a master of the unpredictable; nothing is as it seems, and no event can be anticipated….This guy is a marvel.”
-Bookreporter.com (generic quote)

“Marshall does an extraordinary job. . . . The Intruders captures a sense of the menacing inevitable”
-Time Out London

“Keeps the reader off-kilter....Will have readers looking over their shoulders, feeling a bit paranoid themselves, as Marshall drives it home with a brilliant ending.”
-South Florida Sun-Sentinel on THE INTRUDERS

“Readers will find it very hard to put down this well-written and somewhat spooky novel.”
-Library Journal

“The pacing is excellent, the plotting brisk. . . . Scary brilliance.”
-Baltimore Sun on THE INTRUDERS

“The ending of this thriller is complex and creepy, but the fun is in getting there....This guy is good. Marshall knows how to create real suspense, how to dole it out slowly and catch you off guard....A story that will not let you go.”
-Arizona Republic on THE INTRUDERS

“Remarkable.”
-Locus on THE INTRUDERS

“Well-crafted and intriguing. . . . The Intruders twists and turns its way through a wonderfully weird and frightening tale. The fights are bloody, the chills are sub-zero, and the finale is jaw-dropping. How can you go wrong?”
-Ian Kern, Mysterious Bookshop, NYC

“Welcome to the truly twisted world of Michael Marshall. He plays with your head and appeals to your own deep and dark imagination.”
-The Mirror on THE INTRUDERS

“The suspense kills....Marshall knows how to pull you into his net, hold you encased, and then throw a one-two punch when you’re looking the other way. The Intruders is fast, original, and thoroughly engrossing.”
-Madison County Herald (Mississippi)

“The pacing is excellent, the plotting brisk.....Scary brilliance.”
-Baltimore Sun

”Will have readers looking over their shoulders...as Marshall drives it home with a brilliant ending....The Intruders’ originality and suspense keeps the story fresh.”
-Times Union (Albany, NY)

“What I love about Marshall’s work is his off-kilter view of like and death, which in The Intruders is at its most menacing.. . . . I just loved this book.”
-Deadly Pleasures magazine

“A masterpiece . . . brilliantly written and scary as hell.”
-Stephen King on STRAW MEN

“Marshall...offers a subtle and unnerving story of the little things that can tip the balance of one’s life and send it spiraling into choas...[he] skillfully spins interlocking plot lines as the agents out to ruin Moore and Hunter begin to collide in nightmarish fashion.”
-Publishers Weekly on KILLER MOVE

“Marshal rachets up the stakes of his deftly written suspense novel by injecting telling, if somewhat paranoid, commentary on how regular people can be manipulated by those with the means and ways.”
-Booklist on KILLER MOVE

“A mind-blowing combination of crime and horror, made all the more terrifying because the character doesn’t know why it’s all happening. Compelling and unnerving.”
-Romantic Times BOOKclub

“It’s juicy reading, and the gasp-inducing ending will leave you wishing for more.”
-Cascadia Weekly

“Marshall creates a noir feel to the narrative as he amps up the paranoia factor…a compelling read.”
-Associated Press

“Michael Marshall’s new novel, Killer Move is a lip biting and suspenseful thriller to the end.”
-Wired on KILLER MOVE

“Marshall’s thriller is the perfect summer read:a high concept page turner that is always rooted in character and the everyday… Killer Move is a forceful, well-crafted nightmare for the modern age. ”
-Mystery Scene on KILLER MOVE

“Playing with expectations has always been Marshall’s forte. Here he takes a standard revenge thriller and whip-cracks it into something more satirical...this expertly constructed thriller exploits modern anxieties.”
-Financial Times on KILLER MOVE

“Michael Marshall is a true master of the genre, and he will leave readers spellbound—and justifiably paranoid…”
-Hartford Books Examiner on KILLER MOVE

“A psychological thriller that will mess with your mind and leave you more than a little perturbed.”
-Oklahoma City Oklahoman on KILLER MOVE

“This stand-alone thriller is as breathtaking as they get, and as the end approaches the reader is delighted to find that there’s probably more to come from Michael Marshal about the “modifiers” and their victims.”
-SanFranciscoBookreview.com on KILLER MOVE