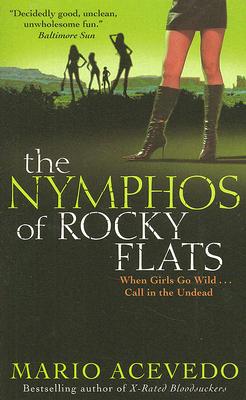 The Nymphos of Rocky Flats

Back home in the States, the reluctantly undead former infantryman pays penance for his war-time sins—making a living as a private detective able to unravel mysteries that baffle his mortal counterparts. Now an old friend has asked him to investigate a bizarre outbreak of nymphomania at the secret government facilities in Rocky Flats, Colorado. Normally, Felix's unorthodox—and downright supernatural—methods of extracting information are foolproof. But this time his efforts inadvertently stoke the lustful fires smoldering within the bodacious babes he's interrogating . . . while eliciting cryptic mentions of Roswell and a top-secret Project Redlight.

P.I. Felix Gomez has finally landed a case he can really sink his teeth into. But when shadowy government agents and determined Eastern European vampire hunters get stirred in, this deadly goulash of tight lips and rampant libidos boils over . . .

Mario Acevedo is the bestselling author of The Nymphos of Rocky Flats, X-Rated Bloodsuckers, The Undead Kama Sutra, and Jailbait Zombie. He lives and writes in Denver, Colorado.