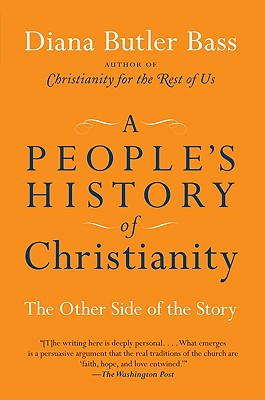 A People's History of Christianity

The Grassroots Movements That Preserved Jesus's Message of Social Justice for 2,000 Years and Their Impact on the Church Today

For too long, the history of Christianity has been told as the triumph of orthodox doctrine imposed through power. Now, historian Diana Butler Bass sheds new light on the surprising ways that many Christians have refused to conform to a rigid church hierarchy and sought to recapture the radical implications of Jesus's life and message.


Praise For A People's History of Christianity: The Other Side of the Story…

“It would be difficult to imagine anyone reading thi book without finding some new insight or inspiration, some new and unexpected testimony to the astonishing breadth of Christianity through the centuries.”
— Philip Jenkins, author of The Lost History of Christianity

“...immediately accessible, helped along by frequent and shrewd linkages to contemporary counterpoints. This presentation includes lots of folk along the way who never made the ‘power lists.’ Readers will resonate with this inclusiveness and be grateful to Bass for making them fellow travelers in the on-going story.”
— Walter Brueggemann, Columbia Theological Seminary

“Charmingly written and refreshing to read, yet rich in details and thorough in its mapping of the major themes and events that have shaped the evolution of the Western Church, A People’s History is our story re-told with both clear-eyed affection and a scholar’s acumen.”
— Phyllis Tickle, author of The Great Emergence

“In this beautifully written history, Diana Butler Bass reveals the living, beating heart of love at the core of Christian faith.”
— Sara Miles, author of Take This Bread

“Butler Bass invites us into a deep conversation with the past which thrusts us into the future with hope. A must for Christians and seekers of all stripes...”
— Alan Jones, former dean of Grace Cathedral and author of Reimagining Christianity

“Diana Butler Bass presents a wide diversity of Christian experience in her gallop through two thousand years of history. The curious but hesitant reader who wonders whether Christianity just might have something in it for them will find that the answer is YES.”
— Daniel Walker Howe, Pulitzer-Prize-winning author of What Hath God Wrought: The Transformation of America

“An excellent introduction to grass-roots renewal movements as well as to the various shapes that Christian spirituality has taken through the ages. ...necessary reading for any who may have thought that history is irrelevant for present-day living.”
— Justo L. Gonzalez, author of The Story of Christianity

“Intelligent and sassy, honest and redemptive. ...a warning that if we don’t remember the blood-stained pages of the past, then we are doomed to repeat them., but also an invitation to participate in the next chapter of what it means to be the Church in this broken world.”
— Shane Claiborne, author of The Irresistible Revolution

“...this book is so much more than a wonderful overview of Christian history. It is also a joyful apologetic for a ‘new kind of Christianity.’ I already gave away my copy, because I knew it would help salvage the faltering faith of a disillusioned friend.”
— Brian McLaren, author of Everything Must Change and A New Kind of Christian

“...a compelling refresher course in our common religious heritage. Bass reacquaints the reader to 2000 years of Christian voices whose faith called for social justice and radical love. By rendering their wisdom accessible, the author encourages the reader to a devotional and ethical renewal that is exhilarating and challenging.”
— Paul Brandeis Raushenbush, Ed. Christianity and the Social Crisis for the 21st Century

“With her customary lucidity and charm, this time in the mode of Howard Zinn’s historical populism, Diana Butler Bass gives us this splendid account of the grassroots movements that have kept alive the spirit and way of Jesus for 2,000 years . . . enjoyable and illuminating.”
— Gary Dorrien, Reinhold Niebuhr Professor of Social Ethics, Union Theological Seminary Professor of Religion, Columbia University

“A People’s History of Christianity is just that-a people’s history, describing the diversity of Christian thinking, ethics and practices over the centuries, and so important to the renewal of religious imagination today.”
— Wade Clark Roof, University of California at Santa Barbara

“In a refreshing look at 2,000 years of Christian history from the bottom up, Butler Bass offers unique insights into the spirit has stirred the hearts and minds of faithful people over the centuries and brought renewal to Christianity during periods of upheaval and distress.”
— Christian Science Monitor

“[T]he writing here is deeply personal and airily structured. What emerges is a persuasive argument that the real traditions of the church are ‘faith, hope, and love entwined.’”
— Washington Post

“For spiritual seekers—whether inside the church or not—and for believers who feel disconnected from their roots, she points the way toward important spiritual resources that have the potential to transform lives, churches and the world as a whole if people are willing to reencounter the riches of the Christian tradition.”
— Christian Century