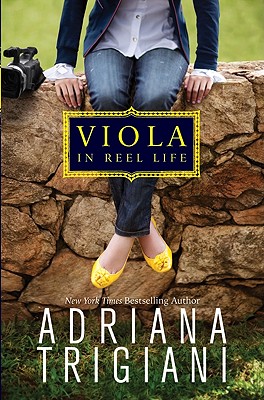 “Brooklyn born and bred Viola must attend a boarding school in South Bend, Indiana, while her parents film a documentary in Afghanistan. She's determined not to enjoy her year at Prefect Academy and is certain that her roommates will be shallow and unable to relate to her. She's wrong, of course, and soon begins a school year in which she grows in her own ability as a filmmaker and makes true friends. A delightful teen novel that shows how real life depends on your perspective.”
— Cathy Berner, Blue Willow Bookshop, Houston, TX
View the List

Viola doesn't want to go to boarding school, but somehow she ends up at an all-girls school in South Bend, Indiana, far, far away from her home in Brooklyn, New York. Now Viola is stuck for a whole year in the sherbet-colored sweater capital of the world.

There's no way Viola's going to survive the year—especially since she has to replace her best friend Andrew with three new roommates who, disturbingly, actually seem to like it there. She resorts to viewing the world (and hiding) behind the lens of her video camera.

Boarding school, though, and her roommates and even the Midwest are nothing like she thought they would be, and soon Viola realizes she may be in for the most incredible year of her life.

But first she has to put the camera down and let the world in.


Praise For Viola in Reel Life…

“A sweet, character-driven story. Viola is very real, as are her feelings, hopes, desires, and dreams.”
— School Library Journal

“This book reminds each of us that a fish out of water really can find a new pond! Read it to remind yourself that your friends really do teach you something new every day.”
— Justine Magazine

“Sarah Dessen for middle school…Trigiani deftly shows that teenage girls can be independent, have positive self-images, and be happy.”
— Voice of Youth Advocates (VOYA)

“Trigiani (Big Stone Gap) takes the familiar boarding school milieu and gives it some welcome nuance and a refreshingly grounded feel in her debut YA work. [She] offers a realistic look at the ever–shifting bonds of friendship and the adjustment to one’s first taste of life away from home.”
— Publishers Weekly
or
Not Currently Available for Direct Purchase
Copyright © 2020 American Booksellers Association