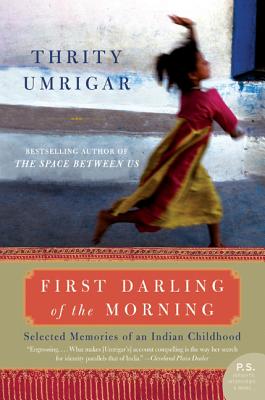 First Darling of the Morning

“[Umrigar] communicates her childhood longing for a cohesive family in deeply felt portraits of those she loves. . . . It is this combination of personal revelation and empathetic observation that makes Umrigar’s memoir so appealing.”— Washington Post Book World

From the bestselling author of The Space Between Us and If Today Be Sweet comes a sensitive, beautifully written memoir of Thrity Umrigar’s youth in India, told with the honesty and guilelessness that only a child’s point of view could provide.

In a series of incredibly poignant stories, Thrity Umrigar traces the arc of her Bombay childhood and adolescence—from her earliest memories growing up in a middle-class Parsi household to her eventual departure for the U.S. at age 21. Her emotionally charged scenes take an unflinching look at family issues once considered unspeakable—including intimate secrets, controversial political beliefs, and the consequences of child abuse. Punishments and tempered hopes, struggles and small successes all weave together in this evocative, unforgettable coming-of-age tale.

First Darling of the Morning also offers readers a fascinating glimpse at the 1960s and 70s Bombay of Umrigar’s memories. Two coming-of-age stories collide in this memoir—one of a small child, and one of a nation.

“[Umrigar] communicates her childhood longing for a cohesive family in deeply felt portraits of those she loves. . . . It is this combination of personal revelation and empathetic observation that makes Umrigar’s memoir so appealing.”
— Washington Post Book World

“Umrigar paints a stunningly detailed portrait of her multifaceted Bombay milieu. . . . Vivid descriptions. . . . Animated, anguished prose. . . . The author evokes her volatile emotions in language that conveys the intensity of her pain. . . . [A] heartfelt memoir about the significance of origins and self-identity.”
— Kirkus Reviews

“Engrossing . . . What makes [Umrigar’s] account compelling is the way her search for identity parallels that of India. . . . Her experiences form the fascinating backdrop of an account reflecting modern India’s childhood, as well.”
— Cleveland Plain Dealer

“Sweet and biting. . . . A mixture of rawness and warmth. . . . Umrigar’s memoir is colorful and moving.”
— Publishers Weekly

“Persuasively re-creating voices and scenes, this memoir could almost be read as another novel. Umrigar builds a literary bridge between personal and historical truths. . . . Umrigar is narrating not just her personal heartache but also that of a global middle-class cohort. . . . The underlying chords in this story about growing up and going away will certainly resonate.”
— Library Journal

“Novelist Thrity Umrigar has penned a page-turner of a memoir. . . . A riveting story of a shy and insecure childhood . . . A fascinating view of family dynamics in a traditional Parsi household . . . This is a good read for its keen observations and message of emotional survival.”
— India Currents

“With painful honesty, Umrigar tells us about her family . . . [A] raw, honset approach . . . [An] intensity of feeling . . . The book takes us back to the bylanes of our own urban childhood.”
— India Today

“Umrigar has undertaken to show us the cultural divide between Indian and American cultures . . . She makes an interesting point, one she’s mentioned in other works: We make up our own families wherever we are; we choose our circumstances; we are capable
— Washington Post