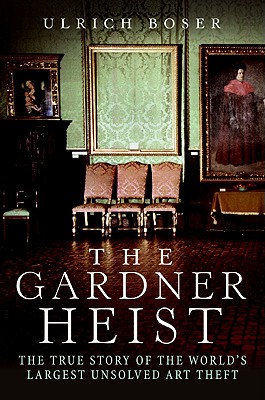 The True Story of the World's Largest Unsolved Art Theft

“The True Story of the World’s Largest Unsolved Art Theft,” The Gardner Heist by Ulrich Boser is a fascinating account of a brazen and amazing criminal act—a book that could help police and investigators solve the mystery of the 1990 break-in and burglary at Boston’s Isabella Stewart Gardner Museum. “A tantalizing whodunit” (Boston Globe) and a “riveting, wonderfully vivid account [that] takes you into the underworld of obsessed art detectives, con men, and thieves” (Jonathan Harr, author of The Lost Painting), The Gardner Heist is true crime history at its most spellbinding.


Praise For The Gardner Heist: The True Story of the World's Largest Unsolved Art Theft…

“A vivid portrait of the high-stakes world of art crime.”
— Lisa Ko, author of The Leavers

“In The Gardner Heist, author Ulrich Boser offers a tantalizing whodunit as he embarks on an exhaustive search for the stolen masterpieces.”
— Boston Globe

“The book is a thrill.”
— The Guardian

“Now we read this. It looks like the largest theft since the Devil Rays took what should have been the Red Sox’s 2008 American League championship. I don’t know if those paintings ended up on eBay, but I do know they’re not on my walls.”
— Senator John Kerry

“Boser’s rousing account of his years spent collecting clues large and small is entertaining enough to make readers almost forget that, after 18 years, the paintings have still not been found.”
— Publishers Weekly

“Boser poetically contrasts the burning, almost unnatural desire art lovers feel for paintings with the cold reality that art theft is one of the easiest and most lucrative types of crime.”
— Kirkus Reviews

“Boser’s book on it has the feel of a speedy ride down a mountain road spiked with hairpin turns.
— Christian Science Monitor

Ulrich Boser has written for the New York Times, the Washington Post, Smithsonian magazine, Slate, and many other publications. He has served as a contributing editor at U.S. News and World Report and is the founding editor of The Open Case, a crime magazine and web community. He lives in Washington, D.C.