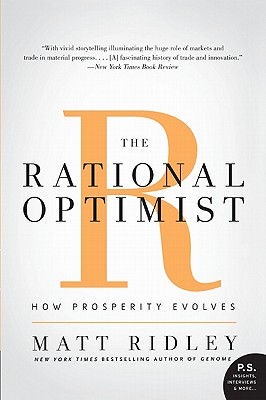 “A delightful and fascinating book filled with insight and wit, which will make you think twice and cheer up.” — Steven Pinker

In a bold and provocative interpretation of economic history, Matt Ridley, the New York Times-bestselling author of Genome and The Red Queen, makes the case for an economics of hope, arguing that the benefits of commerce, technology, innovation, and change—what Ridley calls cultural evolution—will inevitably increase human prosperity. Fans of the works of Jared Diamond (Guns, Germs, and Steel), Niall Ferguson (The Ascent of Money), and Thomas Friedman (The World Is Flat) will find much to ponder and enjoy in The Rational Optimist.

For two hundred years the pessimists have dominated public discourse, insisting that things will soon be getting much worse. But in fact, life is getting better—and at an accelerating rate. Food availability, income, and life span are up; disease, child mortality, and violence are down all across the globe. Africa is following Asia out of poverty; the Internet, the mobile phone, and container shipping are enriching people's lives as never before.

An astute, refreshing, and revelatory work that covers the entire sweep of human history—from the Stone Age to the Internet—The Rational Optimist will change your way of thinking about the world for the better.


Praise For The Rational Optimist: How Prosperity Evolves…

“The chapters tracing the human story from 50,000 years ago through the seventeenth century are themselves worth the price of admission, with vivid storytelling illuminating the huge role of markets and trade in material progress…Read The Rational Optimist for its fascinating history of trade and economics.” — New York Times Book Review

“A superb book…Elegant, learned, and cogent…a far-reaching synthesis of economics and ecology, a triumphant new demarche in the understanding of wealth and poverty…Inspiring.” — George Gilder, National Review

“A fast-moving, intelligent description of why human life has so consistently improved over the course of history, and a wonderful overview of how human civilizations move forward.” — John Tierney, New York Times

“Chock-full of in-your-face challenges to conventional wisdom…Ridley is a sworn enemy of Cassandras and Chicken Littles. In The Rational Optimist, he covers 200,000 years of human history to make a compelling case that over the millennia poverty declined, disease retreated, violence atrophied, freedom grew and happiness increased.” — The Oregonian (Portland)

“A delightful and fascinating book filled with insight and wit, which will make you think twice and cheer up.” — Steven Pinker

“The Rational Optimist teems with challenging and original ideas…No other book has argued with such brilliance and historical breadth against the automatic pessimism that prevails in intellectual life.” — Ian McEwan

“Invigorating…For Mr. Ridley, the market for ideas needs to be as open as possible in order to breed ingenuity from collaboration.” — Trevor Butterworth, Wall Street Journal

“The Rational Optimist will give a reader solid reasons for believing that the human species will overcome its economic, political and environmental woes during this century.” — Fort Worth Star-Telegram

“This inspiring book, a glorious defense of our species…is a devastating rebuke to humanity’s self-haters.” — Sunday Times (London)

“Original, clever and …controversial” — The Guardian

“A dose of just the kind of glass-half-full information we need right now…A powerful antidote to gloom-n-doom-mongering.” — Washington Examiner

“Dr. Ridley provides a grand unified theory of history from the Stone Age to the better age awaiting us in 2010. It’s an audacious task, but he has the intellectual breadth for it.” — New York Times

“Ridley’s dazzling, insightful and entertaining book on the unstoppable march of innovation is a refresher course in human history...Great ideas spring up unexpectedly from every direction, with each new one naturally coordinating with others...” — New York Post

“Without sounding like a cockeyed optimist, The Rational Optimist will give a reader solid reasons for believing that the human species will overcome its economic, political and environmental woes during this century.” — Fort Worth Star-Telegram

A fabulous new book... I was so delighted, amused and uplifted by it that I bought a couple hundred copies and sent one to all my clients. — Donald Luskin, Smart Money