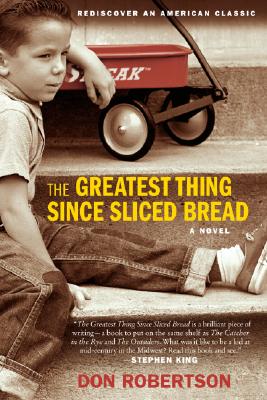 The Greatest Thing Since Sliced Bread

On a quiet autumn afternoon in 1944, nine-year-old Morris Bird III decides to visit a friend who lives on the other side of town. So he grabs the handle of his red wagon and, with his little sister in tow, begins an incredible pilgrimage across Cleveland . . . and out of childhood forever.

Set against the backdrop of one of the worst industrial disasters in American history, Don Robertson's enduring, beloved masterwork is a remarkable story of destiny, bravery, and responsibility, as fresh and relevant as when it first appeared in print.


Praise For The Greatest Thing Since Sliced Bread: A Novel…

“‘The Greatest Thing Since Sliced Bread is a brilliant piece of writing--a book to put on the same shelf as Catcher in the Rye and The Outsiders. What was it like to be a kid at mid-century in the midwest? Read this book and see.”
— Stephen King

“You’ll laugh, you’ll cry, you’ll delight in meeting 9-year-old Morris Bird III.... I loved this book when it was first published in the early ‘60s, and I am just thrilled that a whole new generation of readers is going get to meet Morris, too.”
— Nancy Pearl

“Purely wonderful...Belongs on the same shelf as TOM SAWYER and PERNOD.”
— Chicago Tribune

“Delightful...universal enough to send a twinge of nostalgia through any ex-boy.”
— New York Times Book Review

“Morris Bird III...is the greatest thing since sliced bread, and that nobody will deny....Mr. Robertson is a tremendously good writer.”
— The New Yorker

“A vividly depicted story...a recreation of a time and place that will stir nostagic smiles...tense narrative...You’ll remember Morris Bird III.”
— Lisa Ko, author of The Leavers

“Morris Bird III...may be the most appealing child since THE CATCHER IN THE RYE.”
— Nashville Tennessean

Don Robertson (1929-1999) wrote eighteen novels, including two others featuring Morris Bird III: The Greatest Thing Since Sliced Bread and The Sum and Total of Now. The Greatest Thing That Almost Happened was made into a movie starring James Earl Jones.