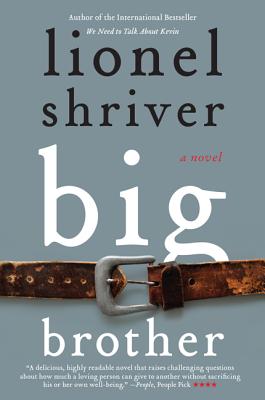 “Shriver is brilliant on the novel shock that is hunger. . . . With honesty, precision and humour, she conveys all the boredom and exhilaration of weight loss, along with its tendency to threaten the people around you.” —Guardian

When Pandora picks up her older brother Edison at the Iowa airport, she doesn't recognize him. In the four years since she last saw him, the once slim, hip New York jazz pianist has gained hundreds of pounds. What happened? And it's not just the weight. Edison breaks her husband Fletcher's handcrafted furniture, makes overkill breakfasts for the family, and entices her stepson not only to forgo college but to drop out of high school. After Edison has more than overstayed his welcome, Fletcher delivers his wife an ultimatum: it's him or me. But which loyalty is paramount, that of a wife or a sister? For without Pandora's support, surely Edison will eat himself into an early grave.

Rich with Shriver's distinctive wit and ferocious energy, Big Brother is about fat—an issue both social and excruciatingly personal. It asks just how much we are obligated to help members of our families, and whether it's ever possible to save loved ones from themselves.


Praise For Big Brother: A Novel…

“Would I recommend Big Brother? Absolutely. It confronts the touchy subject of American lard exuberantly and intelligently; it makes you think about what you put in your mouth and why.”
— Bloomberg
or
Not Currently Available for Direct Purchase
Copyright © 2020 American Booksellers Association