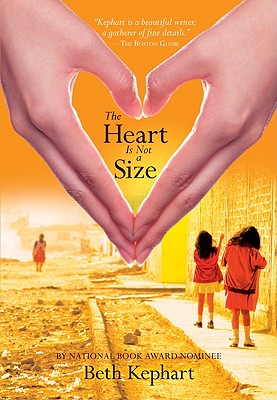 The Heart Is Not a Size

“Beth Kephart has written another must-read book for teens in this story of a group of teens who travel to a Mexican border town to work to help the residents there. She isn't afraid to tackle such big issues as parental pressure, anorexia, and death, and she does it all with compassion, honesty, and beautiful writing.”
— Mandy King, The Boulder Book Store, Boulder, CO
View the List

Georgia knows what it means to keep secrets. She knows how to ignore things. She knows that some things are better left unsaid. . . . Or are they?

When Georgia and her best friend, Riley, travel along with nine other suburban Pennsylvania kids to Anapra, a squatters' village in the heat-flattened border city of Juarez, Mexico, secrets seem to percolate and threaten both a friendship and a life. Certainties unravel. Reality changes. And Georgia is left to figure out who she is outside the world she's always known.


Praise For The Heart Is Not a Size…

“[Kephart] has penned a faster paced novel that explores our inner selves...The writing is vivid. Readers will visualize Anapra’s desolation and hope. They will feel the dust storms. They will relate to the teens...Beth Kephart is a must read YA author.”
— Voice of Youth Advocates (VOYA)

“Kephart’s fluid writing style and ability to illuminate the meaningful and beautiful in the everyday combine to create a tale that is both winningly different and comfortably familiar.”
— Kirkus Reviews (starred review)

Beth Kephart was nominated for a National Book Award for her memoir A Slant of Sun. Her first novel for teens, Undercover, received four starred reviews and was named a Best Book by Kirkus Reviews, School Library Journal, and Amazon.com. In 2005 Beth was awarded the Speakeasy Poetry Prize. She has also written Into the Tangle of Friendship: A Memoir of the Things That Matter; Still Love in Strange Places: A Memoir; Ghosts in the Garden: Reflections on Endings, Beginnings, and the Unearthing of Self; Flow: The Life and Times of Philadelphia's Schuylkill River; Zenobia: The Curious Book of Business; and House of Dance. She lives in Pennsylvania with her family.