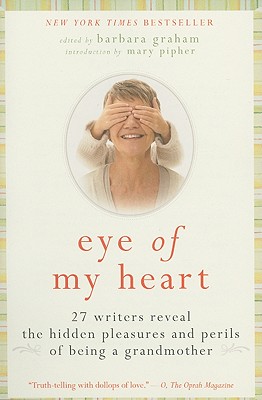 Eye of My Heart

“Finally, a look at grandmothering that is decidedly unsentimental. These clear-eyed essays offer humor and insight as they take on the multigenerational lives many of us now lead.” –Cokie Roberts, author of We Are Our Mothers' Daughters

In this groundbreaking collection, twenty-seven smart, gutsy writers explode the clichés and tell the real stories about what it's like to be a grandmother in today's world. Among the contributors:


Praise For Eye of My Heart: 27 Writers Reveal the Hidden Pleasures and Perils of Being a Grandmother…

“So many different perspectives and vantage points are woven seamlessly that no matter what their personal relationship to the word ‘grandmother’ is, readers will find much to make them laugh out loud—and also to break their hearts.” — Christian Science Monitor

“As someone who was partly raised by my maternal grandparents and adored them, I always knew that grandmotherhood would be intense for me. But I didn’t realize that it would be such a revelation. Eye of My Heart really does what its subtitle suggests—reveals the pleasures and perils of grandmotherhood.” — Erica Jong, author of Fear of Fifty

“Insightful and candid, sometimes painfully so. . . . Women who have achieved grandmotherly status will appreciate this engaging, honest volume of essays by 26 writers who articulate shared emotions about their grandchildren.” — Publishers Weekly

“In illuminating, unsentimental essays, 27 writers offer up insights on the tricky art of grandmothering.” — People

“These stories are so fresh and fundamental, wrenching and joyful, that one is left feeling that the subject has never been cracked open before.” — Harriet Lerner, author of The Dance of Anger

Barbara Graham is an essayist, playwright, and author who has written for Time; O, The Oprah Magazine; Glamour; More; National Geographic Traveler; and Vogue. She is a columnist for Grandparents.com and has two granddaughters.